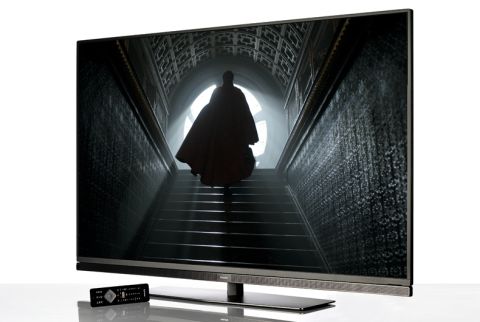 For its picture and features, it’s almost a great TV. At this price, it’s a very attractive buy, but just needs some honing

It’s not unusual for pre-recorded backing tracks to be used to augment live performances; to make them sound as close to the original recording as possible, and create a more complete experience for the audience.

That’s the basic objective behind Philips’ Ambilight (‘ambient light’) technology; a row of LED lights on the back panel that mimics the colours on the screen in real-time, emanating a soft glow of light around the TV.

Ambilight aims to make TV-watching a more immersive and inclusive experience; to act as an extension of the TV screen.

The technology has featured on Philips TVs for over a decade, most recently evolving into Ambilux, which projects the actual image on the screen behind the TV.

But the ambient lighting concept remains a unique selling point of the brand’s models – and in a market as swarming as the TV one, that can’t be a bad thing.

The 55PUS7181 features three-sided Ambilight (there are two- and four-sided versions too), with the LEDs decorating the top and sides.

It’s of little use in a bright room, but dim the lights and you’ll see it’s more than just a gimmick – especially if the telly is placed near to a rear wall.

You can choose whether it reacts to the content’s picture or audio – set to the latter, the pulsating John Carpenter-esque synths in Stranger Things make it flash like a police siren, making things even stranger.

It can also be set to a solid colour: red, blue, white or (ultra-satisfying when watching Re-animator) green.

MORE: Philips unveils its first OLED TV, a 55in 4K screen with Ambilight

That’s not the 55PUS7181’s only glowing feature, however. A 4K telly with HDR support, it embraces the cutting edge of home cinema technology today.

It can make the most of both technologies showboated by Ultra HD Blu-rays, providing a 4K player is plugged into one of the telly’s two HDMI inputs that support HDCP 2.2 (there are two further HDMI inputs that don’t).

The second input means that there is room for a 4K-supporting PlayStation 4 or Sky Q box too.

At the moment, the HDMIs are the only way you can watch 4K HDR content on the Philips; while the 4K material on Netflix and Amazon is available through the telly’s apps, it doesn’t detect the HDR on the handful of programmes that have it.

The solution could just be a software update away, but at the time of writing this goes on the want list.

The telly’s smart apps include YouTube and BBC iPlayer, although the absence of other UK TV catch-up apps, such as ITV Player, All4 and Demand5, means the 55PUS7181 lags behind Samsung, Sony and Panasonic sets.

The Philips is still a fairly comprehensive multimedia hub though, thanks to its Android Lollipop operating system.

Apps are available to download from Google’s Play Store and Phillips’ App Gallery, from TuneIn Radio and wuaki.tv to Vevo and Spotify, and there’s 16GB of built-in memory to store them.

Three USB slots can expand that figure further, which is a bonus for gamers in particular.

Still hanging onto your DVD or VHS player? The good news is that the Philips has legacy inputs such as component and Scart.

However, as we’ve found on other Android-running Sony and Philips sets, the comprehensive features seemingly come at the cost of cluttered menus. Settings lack the intuitiveness of Samsung’s Tizen or LG’s WebOS, with most tasks – adjusting contrast, turning on picture modes – feeling like an effort in comparison.

The remote eases our frustration somewhat though. Slimmer than the company’s previous tool, it’s not particularly smart, however the back features a QWERTY keyboard, which is massively helpful for inputting email addresses and passwords.

Casual web browsing, which normally you’d rather do on your phone, is actually appealing on the Philips.

Speaking of appealing, the 55PUS7181 isn’t just a pretty picture from the back. Instantly eye-catching as we play The Martian on Ultra HD Blu-ray, it’s a true 4K campaigner.

The picture is as pin-sharp, clean and smooth as the very best sets at this price.

There’s brightness and clarity in abundance, enough to see the painful procedure of Matt Damon dislodging metal from his stomach in all its gory detail, and the striking dusty red landscapes of Mars (aka the Jordanian desert).

Initially, the sandy dunes look more blood stained than red tinged, the Philips’ palette a little over saturated in its out-of-the-box state. So picture settings should be your first stop.

A quick set-up offering three levels (‘more’, ‘medium’ or ‘less’) of brightness, colour, contrast and sharpness will get you answering Pointless teasers within a minute, though we would recommend experimenting with the extensive settings and extra processing modes using a THX Optimizer disc.

There’s certainly a balance to be struck when it comes to contrast and brightness, between getting dark blacks without dulling whites, and vice versa.

The result of our fiddling is pleasing, although we’ve seen blacker blacks from rival sets – and not just OLED ones.

Upon detecting the Blu-ray’s HDR content, the 55PUS7181 goes into an HDR mode (either personal, vivid, natural or standard) where both brightness and contrast are generally whacked up. But these are also adjustable.

The benefits of HDR may not hit you in the face as 4K resolution does, but you don’t have to look hard to notice the nuance it brings to the picture either; solar panels are defined at their very brightest (which is pretty bright), there’s multiple shading in everyday items like clothing, and stars shine in different intensities.

As we stream Stranger Things in 4K from Netflix, the Philips shows no signs of discouragement when stripped of the HDR and extra detail and stability brought by the disc format.

The picture remains resiliently perceptive: squeaky clean, nicely detailed and attention grabbing. Christmas fairy lights and spotlights punch out against the dark backdrop and even in daylight scenes there’s gleam to choppers and photo frames.

As the boys flee from the bad guys and a chase ensues, there’s a surprising efficiency to which the Philips handles busy, fast-moving close-up shots, with neither blur nor judder smearing the sequence.

Colours are punchy and solid, but its palette isn’t quite refined or subtle enough to be truly realistic.

Forest leaves don’t quite have their natural autumnal shade, and on the opening credit sequence, we’ve seen deeper streaks of reds on rival sets.

Finer details and textures aren’t the 55PUS7181’s strong suit, so those era-accurate bowl and afro haircuts can’t quite be appreciated down to each strand.

And due to the Philips’ lack of outright dark detail we don’t feel we’re getting the whole picture in the night-time forest scenes.

The picture could almost be deemed too sharp for its own good.

It often looks over-etched, even with the sharpness turned down (Ultra Resolution processing certainly isn’t needed), and thus lacking the skill to naturally layer landscapes and capture dimension realistically.

MORE: Philips B8 Dolby Atmos soundbar to go on sale for £900

Close scrutiny reveals hints of uneven backlighting in the very bottom corners of the screen too, though its severity is not to the point of distraction.

Even in the age of 4K, standard Blu-rays shouldn’t be forgotten – and the Philips applies the same impressive judiciousness to its delivery of high-definition content, whether it’s via Blu-rays or broadcasts.

The picture is generally crisp, with outlines still fiercely drawn and colours bright and full of life.

As long as your expectations of standard-definition programming factor in some softness, even the lowliest broadcasts of Top Gear won’t be a no-go zone for buyers of the Philips.

It’s not just Ambilight that draws your attention to the Philips’ back panel; it also has a driver with an integrated bass port.

The audio performance has been taken a step further with a slim soundbar neatly integrated into the front of the set.

It’s hardly an alternative – even the most average of budget soundbars offer more detail and a better balance – but who’s to argue with a discreetly applied extra boost in volume?

It’s clear and loud enough to reach the corners of a large living room, although the higher the volume the harder the midrange and treble become.

Past the halfway mark, it can become quite an uncomfortable listen, as Winona Ryder directs her hysteria towards fairy lights in Stranger Things!

But for the money, the Philips 55PUS7181 is pretty appealing. It’s just a nuance here and a software upgrade there away from being a star buy.