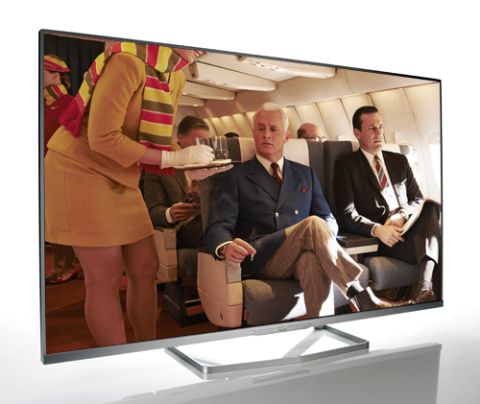 Stick with HD content and the Philips dazzles with confidence, but rivals offer better performance for a better price

If you’ve converted your film collection to Blu-rays and only have eyes for Full HD content, then this Philips 55PFS6609 is well worth an audition.

The 55in LED-backlight LCD screen, with Full HD 3D and smart features, is the first Philips TV we’ve seen this year, and it shines with high-definition content.

Play the Blu-ray of Iron Man 3 or watch Formula 1 races on BBC One HD, and you will find crisp lines, punchy colours, and enough detail to keep you hooked.

The Philips screen has a glossy look with stark highlights and deep blacks, and stable motion-handling that keeps action scenes in check.

This translates to 3D films, too, with The Adventures of Tintin conveyed with a dramatic and pleasing sense of depth.

The supplied active 3D glasses (two pairs) could be more comfortable, though.

The colour palette is vivid, although the reds aren’t quite as fiery and vibrant as we’d hope.

The Philips is much happier playing with greens and blues, which have a rich and detailed balance (although we think the dark scenes could have more depth and insight).

We wish the Philips had a dedicated tint adjustment in its picture settings, as the temperature options aren’t subtle enough to inject a touch of rosiness to skin tones.

We think the picture could be cleaner too, and had to set the noise-reduction setting to medium to soften the graininess of HD and standard-def pictures.

Where Blu-rays look sharp and exciting, the Philips 6609 isn’t quite as talented when it comes to standard-definition content.

The upscaling isn’t up to the standard you’d expect of a £1200 TV and struggles to deliver a noise-free picture.

The film Stoker’s natural palette is bereft of subtlety on DVD, and the shadows need to have more depth to fully convey the spaces between characters and rooms.

The picture looks a little flat, and the grainy texture is more apparent. Flick over to any standard-def broadcast channel and the fuzzy edges, lack of deep blacks and softness disappoint.

Our favourite feature is the 6609’s Ambilight: a series of LEDs on either side of the TV change colour in response to the picture, so adding to the perceived depth of field.

Unusually for a TV, the 6609 has a white finish on the back panel, and the remote control comes in white, too.

Build quality is sturdy, although that swivel stand could look a bit smarter. The Philips badge at the bottom of the screen still looks like it’s been stuck on as an afterthought. We want more finesse from Philips.

Even with Philips’s Ambi-woox technology (a special driver that aims to boost midrange and bass) on board, the 6609 sounds a bit thick and muddled.

Voices sound rather muffled and hollow, and turning up the volume for clarity gives the sound a bright edge. It could do with being cleaner and more cohesive.

We would recommend pairing the TV up with a detailed and dynamic soundbar, such as the excellent Philips HTL9100, if you want to fully enjoy your Blu-ray films.

BBC iPlayer, Netflix and YouTube are the essential on-demand services on board, alongside a variety of apps. Philips’s own Cloud TV is also here, giving access to TV channels on the internet.

The Smart TV portal remains neat and orderly, but could do with a lick of paint.

We usually find Philips TVs easy and intuitive to use, but the 6609 left us frustrated.

The interface and menu settings could be more responsive, and we have a major gripe with the sluggish remote control.

The buttons need to be pressed firmly and the remote has to be pointed straight at the TV; the plastic build did it no favours, either.

You get four HDMI inputs on the Philips 6609, all of which support ARC (Audio Return Channel). There are also two USB ports for plugging in flash drives, and an optical audio output.

You can connect to your home network using the wired ethernet port method or by using the TV’s built-in wi-fi.

There are analogue connections too – component and phono inputs – and two tuners with the set: one for Freeview HD and one for satellite channels (which isn’t Freesat compliant).

We’re left with mixed emotions on the 6609. On one hand, it’s not as good with standard-def content and it can be sluggish to use.

On the other hand, it looks brilliant with anything in high-def. But is that enough to splash out £1200 on? We’re not so sure.