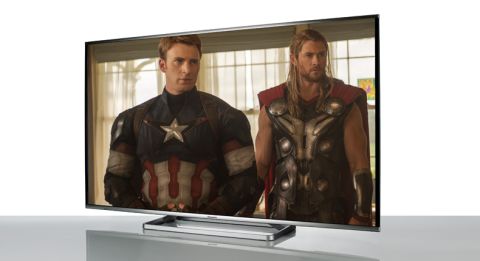 It looks mighty cheap for a 4K TV, but that’s because it plays almost none of the 4K currently available

The problem, again, is that Panasonic has seen fit to launch yet another 4K TV without the HEVC codec necessary to play 4K content from the only sources currently supplying it in any kind of quantity – namely Netflix and Amazon Instant Video.

It won’t play YouTube clips in 4K either, and we couldn’t even get it to play 4K MP4s from a USB stick. So the only way to get 4K on the TX-55AX630B is to buy an external source that supports it and send it to the TV via one of the three HDMI 2.0 inputs.

Consider that, practically speaking, there are no such external sources widely available, and you’ve got a 4K TV that’s pretty seriously hamstrung from the start. But let’s say that’s something that you’re willing to live with – what’s the TX-55AX630B actually like?

In terms of picture performance there are pros and cons. Play a Blu-ray and there’s a clear drop in sharpness and detail compared with a champion set such as the Samsung UE55HU7500, and that results in a picture which is that bit less dramatic and crisp.

Shirt patterns that are clearly defined on the Samsung are that bit blurrier on the Panasonic. Whites are a bit of an issue, too, in that they lack purity. It’s as if Panasonic has gone for plasma-like warmth, but it’s gone a bit too far and made things over-rich.

It’s very difficult, for example, to get realistic skin-tones, even with extensive adjustment to the colour temperature and hue settings, unless you drain the picture of colour entirely.

There are good points, though. Motion is well handled, with vertical pans that are solid and smooth and horizontal movement that blurs a little but is satisfyingly free of judder.

But the real strength of the Panasonic is its contrast. Those whites might not be pure, but they combine with blacks that the vast majority of sets can’t match to make darker scenes look pretty fantastic.

Some rivals hunt down any light in a scene and pump it up as much as possible, and the result can be a picture that lacks the intended drama and foreboding. Not so with the Panasonic TX-55AX630B – every night-time scene of The Babadook is every bit as frightening as it’s supposed to be here.

If you find yourself having to slum it with standard-def video from a DVD or the Freeview tuner, you’re not punished for having a 3840 x 2160 panel as you were in the earlier days of 4K. There are plenty of tellies out there that will sharpen up BBC News a little more effectively, but this is a perfectly watchable picture with the same sort of general traits that you see when watching a Blu-ray.

The Panasonic works with 3D, too, if that’s important to you. The results are decent, but you will find yourself having to pump up the brightness to compensate for light loss and there’s a bit of crosstalk that can take its toll during prolonged viewing.

Whatever you watch is accompanied by fairly decent sound by flatscreen standards. There’s no harshness or reediness to speak of, but the audio nevertheless misses the sort of punch and solidity that the best-sounding TVs can manage.

Where Panasonic is now getting things pretty spot-on is in the user interface and smart features. While there aren’t dedicated apps for 4oD or ITV Player, Freetime – the first time we’ve seen it built into a Freeview-only set – can be used to access those services.

And with big hitters such as Netflix, iPlayer, Amazon Instant Video, YouTube, Wuaki and TuneIn all present and correct, you’re never short of something great to watch or listen to.

The fact that you can customise the home screen for quick access to your favourite features and apps (as can anyone else who regularly uses the TV) is a thoughtful added bonus.

In the end it’s rather tough to slap a star rating on the Panasonic TX-55AX630B because it is a good deal cheaper than any other 4K TV worth considering.

But then its format limitations mean that at this point you probably shouldn’t consider it a 4K telly at all, and that means you’re looking at what is essentially a quite competitively priced TV with a few picture flaws.

Perhaps it will make more sense once Panasonic’s much discussed 4K Blu-ray player finally hits the shops, but there’s every chance a better cheap 4K TV option will have materialised by then.