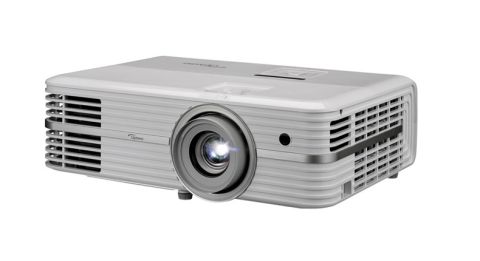 If you’re looking for a top-class projector, the two technologies you’re going to want are Ultra HD resolution and High Dynamic Range (HDR).

Just a few years ago, projectors like that would set you back many thousands of pounds. But now, there are devices like Optoma’s UHD40 that can bring you those technologies for less.

The UHD40 certainly looks the part. Weighing in at 5kg, it is small enough to fit on any small table.

On the top are controls for zoom and focus, while at the back, you’ll find all the expected connections. These include two HDMI ports (one handily marked ‘4K’) and a USB Type A connection so you can power streaming sticks.

On the audio side, while this projector has a couple of 5W speakers, there’s also a 3.5mm audio input and output. Built-in speakers should really only be used if absolutely necessary, or the sound quality won’t be good enough to match your picture.

Switching between inputs is simple with Optoma’s remote control. The button layout is straightforward, with the inputs along the bottom and a helpful backlight that turns on with each press.

If we’re being picky, we’d like it to detect movement or have a specific backlight button so we can see what we’re pressing before we press it, but that’s a minor issue.

Giving this projector its 4K capabilities is a 12mm chip that, while not natively 4K, works in conjunction with two million microscopic mirrors to put the full 8.3 million pixels on screen.

While some might prefer native 4K projectors, this technology does allow for less expensive products to deliver Ultra HD resolution.

But the UHD40’s HDR feature is a little more complex. Most HDR content is in the form of HDR10 which requires (among other things) a BT.2020 colour space.

However, the UHD40 is only capable of recreating the smaller Rec.709 colour space, meaning that while the projector can accept HDR content, it’s unable to fully show off the true range of colours available.

Switching between SDR and HDR modes is done automatically. Should the projector detect that the content is HDR it will immediately change.

There is also a conversion mode which adapts SDR content to HDR, and while it works better than we’ve seen on other projectors, it’s not necessarily the best option. With this on, the picture is slightly richer with punchier colours, but natural skin tones look a little burned.

All this gets translated onto your screen using the UHD40’s 2,400 lumen lamp, which Optoma says has a lifespan of 4,000 hours on its maximum settings. The company also claims that the UHD40 has contrast ratio of 500,000:1 – a figure that, on paper, looks pretty good.

We adjust the brightness and contrast for the UHD40, optomising it for our testing rooms, and bump up the sharpness by a couple of increments.

From the moment the Blue Planet II logo appears on screen, we’re met with a positively punchy image.

The deep, rich blues of the ocean stand out well against the dark black background and the way the sun curves around the planet offers a range of yellow light flares.

As the camera moves over the Great Barrier Reef, the sprinkling of greenery – trees and shrubs and earth – on the side of the mountains are diverse and delicate.

As we dive under the water to examine life on the reef, watching a cuttlefish change the pigments on its skin, the streaks of blue-white light along its body walk that fine line of both being natural yet impressive. Rather than letting the bright colours wipe out the lesser hues, the UHD40 still shows the little scratches and ridges on the cuttlefish’s face.

The UHD40 doesn’t skimp on the detail either. As a crab scuttles across the sandy ocean floor, this projector insightfully renders tiny grains and rocks to give you a truly detailed image. Flecks of coral floating in the water come across well too; distinct without being distracting.

We would recommend turning the UltraDetail setting to its lowest mode. It offers some minor definition that’s especially noticable on fabrics and hair. Push it any higher and your picture will appear overly crisp.

Switching to the final climactic fight scene in Wonder Woman, we test out the UHD40’s handling of darkness and are pleasantly surprised by its depth.

However, we would recommend turning on the Dynamic Black mode – an adaptive contrast setting for low light – for the best range of dark colours. The results are impressive, with a distinct difference between Wonder Woman’s black hair and the murky night. The way the light falls across her face is quite nuanced.

Our one criticism here might be that other projectors handle black detail a little better - offering more clarity to Wonder Woman’s hair, for example – but it’s a minor point and the UHD40 still performs well, especially considering its low price and the limits of the technology.

Moving to a Blu-ray of Pacific Rim, the UHD40 delivers again. Colours are natural and movement is smooth – even with the rapid stick-twirling combat between protagonists Raleigh Becket and Mako Mori – and there’s a good amount of detail.

The upscaler isn’t quite as sophisticated as others we’ve come across, but you have to look closely to spot it and it any excess noise doesn’t distract from how watchable this picture is.

The Optoma UHD40 is a projector that brings top-tier technology to a lower price bracket – and implements it very well indeed. It’s no understatement to say that rival manufacturers are going to have a hard time trumping this performance.

Colours are vivid, yet realistic; there’s lashings of detail; and motion remains silky smooth. There’s no other way to say it: the Optoma UHD40 is a simply outstanding budget projector.

See all our Optoma reviews