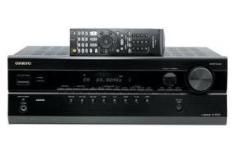 For the money the ’SR308 does a good job. It just lacks that streak of brilliance required from a five-star product

In its place was a more refined, mature and classy sound. But will the same qualities be evident in this ultra-affordable model?

Given the price, you won't be surprised to find a relatively modest feature count, although the 'SR308 is smart enough to offer you three 3D ready HDMI 1.4 inputs.

Good manners
Some budget amps can sound boisterous and bright, but the 'SR308 produces a very mild-mannered, considerate sound.

Tonally, the amp is nicely balanced and there's no hardness as cars accelerate, screech and occasionally explode during John Travolta's pursuit of a would-be suicide bomber in From Paris With Love.

The only drawback is that the amp sounds too restrained. Spinning U2's 360° At The Rose Bowl the Onkyo sounds unable to cut loose and display enough dynamics and scale.

If you're working to a very tight budget, the Onkyo will do a perfectly good job. However, if you can release some extra funds you can move into the realm of some seriously talented amps.