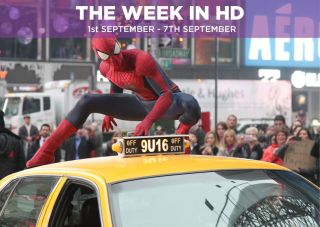 Despite improving on its tepid predecessor, Marc Webb's sequel to The Amazing Spider-Man is still an awkward balance of too many storylines and villains, making for a messy film.

Still, TASM 2 has a lot going for it. Andrew Garfield and Emma Stone pick up where they left off with their fine chemistry, the film looks outstanding (it's been mastered in 4K) and Hans Zimmer's dubstep influenced score is a huge presence. A worthy demo-disc if you're looking for one. If only it could have told one story instead of half-a-dozen.

Read our review of the film's cinema release over here.

As the seventh and final series gets set to hit TV screens, fans can pick up the Blu-ray of the sixth series of this rough and rowdy TV show charting Jackson Teller's (Charlie Hunnam) rise to the top of a motorcycle gang.

Perennial family favourite Ghostbusters gets another Blu-ray release, this time packing in the original and its sequel. While we're fans of the first one, the sequel does have its admirers. And it does have that painting of Vigo (Wilhelm von Hornburg) that creeped us out as kids... but the first film does have Stay Puft Marshmallow Man... we're conflicted.

Neil deGrasse Tyson explores the depths of space and time with this series (produced by Family Guy's Seth MacFarlane) that covers nature, evolution and the universe. A spellbinding watch.

David Lynch's profoundly odd TV series hit Blu-ray recently, but if you're still on the fence then you can watch it on SyFy. It all begins with the murder of high school girl Laura Palmer, which brings FBI agent Dale Cooper (Kyle MacLachan) to the town of Twin Peaks. Where it goes from there... well, you'll have to watch and see.

Love is to Die. The penultimate episode of True Blood (series finale is next week!) sees Sookie distance herself from Bill after he refuses to take the cure.

Christian Bale and Johnny Depp star in Public Enemies, a film in which Depp drops his jaunty character act for a real-life person. Depp plays famed robber John Dillinger and Bale Melvin Purvis, a G-man sent to capture him.

Michael Mann's 1930s-set crime film wants to be an epic, much like his earlier classic Heat, but it doesn't have the heft of that film. Marion Cotillard is terrific in it though.

Pies and Tarts. We're nearly half-way through the season and the bakers are facing pies and tarts. Undoubtedly someone will titter when the word 'tart' is said.

The bakers must also make sweet custard tarts of their own recipe.

With a hugely disappointing World Cup behind them, England's players will be looking forward to the Euro 2016 Qualifying campaign. First off is a friendly with Norway, with Wayne Rooney captaining a new-look England team.

A boy wishes to be a grown up and wakes up the next morning looking like Tom Hanks. Despite the jump in age he's still a 12 year-old kid at heart and he struggles to conform to the strange world of 'adults'. An old school film with lots of heart and humour.

Icarus. Olivia is not too impressed with Fitz's answers to questions about Operation Remmington, which could have repercussions for her relationships in the White House. Former Friends actor Lisa Kudrow stars.

Nicholas Cage has been in a billion films recently, not all of them good, but we think Knowing is more good than bad. The premise for this sci-fi is suitably bonkers; Cage's MIT professor discovers a series of numbers that can predict when and where disasters will happen, and he sets off to avert the entire world from being destroyed.

It's bonkers but also very entertaining.

Last time out Warrington gave the home team a bit of hiding with a 17 point victory. St Helens will want to reverse that deficit when the two teams meet again on Thursday.

Overshadowed by Sean Connery's earlier Bond films, George Lazenby's one-and-only appearance as the world's most famous spy is an underrated one.

In OHMSS, Bond quits the Secret Service to go after Blofeld (Donald Pleasance) who's developing biological weapons in Switzerland. Great score, decent action and, in Diana Rigg, you have a surprisingly affecting Bond girl.

It's time to see what's happening over at the Brockman household as Pete and Ben go on a winter camping trip (is that ever a good idea?), while Jake has to make a decision about whether to take a gap year or not.

Kevin Spacey takes the lead role in this Oscar-winning film about a disillusioned father looking for some excitement in his life. The characters aren't always likeable, in fact they're downright unlikeable at times, but Beauty is still a funny film with a caustic sense of wit.

Doctor Who BBC One HD, 8pm

Robot Sherwood. We're in wacky territory this week as the Doctor teams up with Robin Hood to save Sherwood Forrest from an army of robots.

Let's hope the Sheriff of Nottingham is more Alan Rickman in Prince of Thieves, and Robin Hood is absolutely nothing like Russell Crowe's recent performance.

Did you know that Speed is 20 years old this year? One of the best action films of the 90s and one of the few films that escaped from under Die Hard's shadow.

The plot follows Keanu Reeves LAPD officer, who's challenged to save a bus full of commuters after a bomb has been planted on it by Dennis Hopper's terrorist. If the bus falls below 50 mph, it will explode. If anyone gets off the bus, it'll explode.

Great fun from start to finish.

A decent political drama starring Ryan Gosling and George Clooney. As Governor Mike Morris's (Clooney) campaign for presidency heats up, PR staffer Stephen Meyers (Gosling) gets wind of some allegations that could tar the governor, pitting him in a battle of wills with the all-powerful Morris. Nice to see Clooney play a morally shifty character for once.

Despite Nico Rosberg's shenanigans at Spa, its still all to play for in the Drivers World Championship as we reach Monza.

The gap between Hamilton and Rosberg has grown but is not insurmountable, and with Red Bull's Daniel Ricciardo sneaking in behind, they'll need to be focused on not crashing in to each other.

Will Ferrell's Ron Burgundy returns in this off-beat sequel to the cult original. Thankfully it doesn't wear out its welcome with duff jokes, but it is slightly less-focused (if that's even possible) than the original.

Fans will lap it up, others might be more bemused by what's going on.