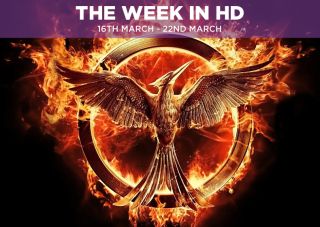 MORE: Trailers of the Week: Game of Thrones, Daredevil, Tomorrowland and Pixar's Inside Out

READ: Dolby Atmos for mobile - everything you need to know

The Hunger Games movie machine shows some cracks in its latest instalment, but it's still worth a watch. After the evens of Catching Fire, Mockingjay picks up almost straight away with Katniss leading the rebellion from District 13, while Peeta is being used by President Snow as a political pawn in the conflict. It's light on action but it still packs a punch thanks to a relentlessly grim tone.

Hopefully when Part 2 emerges it will send off the series in style.

The Dolby Atmos soundtrack on the Region A (US) Blu-ray is conspicuous by its absence on the UK release.

Buy The Hunger Games: Mockingjay Part 1 on Blu-ray at Amazon

Based on the book of the same name by Joe Hill (son of Stephen King), Horns is about Daniel Radcliffe's Ignatius "Ig" Perrish, accused of killing his girlfriend Merrin (Juno Temple) in a brutal attack. When demonic horns manifest on his head (they just do), he realises he can get people to confess their secrets to him, putting him on the path to finding out who really killed Merrin.

The tone and pacing is a little uneven, but Radcliffe's confident, engaging performance, some wicked humour and delicious evil make it just about worth watching on a rainy night.

(You could, of course, just read the book.)

Buy Horns on Blu-ray at Amazon

Rogue's Gallery. Gotham's back on UK screens, and we return to the action with an entire asylum filled with new villains.

Jim Gordon's been stripped of his badge and demoted to being a security guard at Arkham Asylum, which works out just fine for plot reasons. There, he befriends Dr Leslie Thompkins (Morena Baccarin, aka Firefly's Inara) and finds shocking* experiments being conducted* on the inmates.

Need a reminder of all the new characters, political backstabbing and gory deaths that have happened in the past four series? Catch up with all the latest news from the Seven Kingdoms before the fifth series starts on 13th April. Not long to go now!

Arsenal's Champions League hopes hang by a thread after a profligate performance against French opponents Monaco.

Giroud and co. will need their shooting boots on if they want to progress, but Monaco won't make life easy for them: they may not score many goals but they concede even fewer.

Hemlock. Sherlock is bored and lonely, which makes for a hilarious run of gags as our consulting detective tries to keep his mind off Kitty's absense. The murder mystery plot riffs off canon story The Man with the Twisted Lip, but it's Sherlock's behavioural oddities, his casual art thievery, expertise in sauces, and a fan-pleasing appearance of Clyde the tortoise that really make the episode tonight.

Joan, on the other hand, is having relationship problems. Also, is someone trying to murder her?

We're introduced to five new amateur cooks hoping to impress the judges with their cooking. The two best dishes get greenlit to the next round, while the rest must cook again, this time using the same main ingredients from their first dish to create something completely different. And hopefully better.

At the end, the final four will present a main and a dessert to a trio of past MasterChef finalists, including last year's champion Ping Coombes, and first ever winner and Wahaca restaurant owner Thomasina Miers.

Professor Brian Cox and Dara Ó Briain are back for a new space series, and they have awesome Apollo astronaut and second man on the moon Buzz Aldrin with them!

Buzz (we're just going to call him Buzz, because how often can we do that?) talks about how we must look beyond the moon for mankind's next giant leap.

While Brian tries to land his own lunar module, Dara looks at what happened to the moon rocks brought back to Earth. (They haven't hatched. Yet.)

Tune in every night this week for a new episode of Stargazing Live, all the way up to the spectacular solar eclipse on Friday 20th March.

For the five new contestants, their first dish is all about showing the judges the style of cooking they love. If that hasn't worked, the chefs will take part in a reinvention test - creating a new dish using the same main ingredient from their previous attempt, giving them the chance to show off their repertoire.

Then, the four remaining chefs will cook for judges who've been through all of this before: former MasterChef finalists.

Nanda Parbat. Team Arrow are at a crossroads: Oliver heads to the League of Assassins to save Malcolm from their wrath, but gets an interesting offer from Ra's Al Ghul that may change the balance of good and evil in Starling City.

Thea, meanwhile, discloses her role in Sara's death to sister Laurel, while Ray is close to finishing the A.T.O.M. suit.

Frank decides to take the law into his own hands in this chilling thriller.

DCI Morton is one step away from uncovering the truth about Pettigrew's death, and Vincent and Natalie make their own discovery.

It's the second quarter-finals, and we're excited to see who will rise to the challenge of 'the critic's brief' tonight.

Restaurant critic and occasional MasterChef: The Professionals judge Tracey MacLeod wants vegetables to be the star of the main course. As for dessert, she wants 'fruit and spice, and all things nice.'

The Queen is accused of treason, and the Musketeers risk their lives to prove her innocence. They steal her away from the palace, and try to expose Rochefort as a Spanish spy.

But is Rochefort too clever for them?

WINTER IS COMING. Well, it was five years ago. Yes, TV fans, it's that time of the year when you can rewatch Game of Thrones right from the start.

It's series one, episode one, and the fight for the Iron Throne has just begun. Let's take a moment to appreciate how happy and alive the Stark family are.

We're introduced to the main players - Starks, Lannisters, Littlefinger, Danaerys, the Dothraki, the Night's Watch - and get a taste of the brutality, political intrigue and mayhem (and awesomeness) that the show has in store for us over the next four series.

Writer, satirist and director Armando Iannucci - the man behind The Thick Of It and Veep - takes the reins for tonight's show on culture and arts.

He looks at the traditional forms of high culture - poetry, classical music, fine art - and asks why they matter, and why people feel excluded from them. He speaks to poet Kate Tempest, visits an exhibiton of Goya's drawings, meets Apollo Music Projects who aim to change children's lives with classical music, and is joined by comedian Josie Long to discuss how it all fits in with today's austerity-hit world.

There's no family sci-fi fun like 80s family sci-fi fun. A 12-year-old boy from 1978 falls down a ravine and finds himself transported to 1986 - where he's the same age but everyone else around him has aged.

At the same time, NASA discovers an alien spaceship, but are alerted to the young boy's dilemma when he recounts memories of a shiny spaceship and an A.I. named MAX who guided him through planetary adventures.

Live from Twickenham. The Six Nations goes down to the wire with England, Ireland, Wales and, dare we say it, even France in with a chance of winning the tournament. It should come down to points difference, and England might find it tricky against France if Wales and Ireland find their scoring boots.

In space, no one can hear you scream.

Alien is more than 35 years old and it still ranks among the best the sci-fi genre has to offer. The set-up is simple but incredibly effective. A spaceship picks up a distress call on a barren planet (LV-426), lands on it and investigates. Then, one of their crew falls ill – and all hell breaks loose.

Ridely Scott has rarely been better, and in Sigourney Weaver's Eileen Ripley you have one of the great heroines in cinema history.

Buy Alien: The Director's Cut on Blu-ray at Amazon

Every match from now to the end of the season is going to be a big one, and this North-west derby could go some way to deciding the fortunes of both teams.

Liverpool have been in great form since the turn of the year, and after tonking Tottenham Hotspur, United might have just woken up from their slumber. Expect fireworks.

Update: BBC has declared that the last two episodes of Top Gear series 22 will not be shown, which includes tonight's episode, which would have been the last in the series. We'll never know if the McLaren MP4, the Ferrari LaFerrari and the Porsche 918 Spyder ever raced against each other to find out which is the best hybrid supercar.

Is it the end of the road for Top Gear?