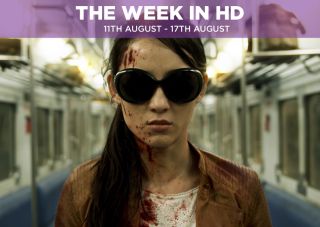 For Kermit the Frog, life isn't easy being green, especially when he's faced with a devious doppelganger intent on stealing London's Crown Jewels. This pun-tastic, madcap comedy has all your favourite characters, a number of ridiculous cameos, and a couple of catchy tunes thrown in for good measure.

"Exhilarating, brutal and bone-crunchingly effective", The Raid 2 is another breathless martial arts film from the creators of 2011's The Raid, and is a sequel that outdoes its predecessor with some brilliantly devised fight scenes. Read our full review of this must-watch sequel.

It's a first-round Oxbridge match, with St Anne's College, Oxford going up against Gonville and Caius, Cambridge in hopes of moving up to the second round in this fiendishly difficult quiz show.

The riders head to the Red Bull Indianapolis Grand Prix - the tenth round in the championship. Will Marc Marquez storm to his historic tenth win?

If you love your Marple and Poirot, then you need to tune in to this delightfully cheerful and good-natured murder mystery show. The whodunnit mysteries are great, the characters loveable, and the sunny Caribbean setting certainly helps.

In this episode, DI Goodman (Kris Marshall on excellent form as the hapless but brilliant detective) and his team investigate a murder during a film shoot, but it seems the wrong person was killed via poisoned chocolate. Michelle Ryan and Peter Davison guest star.

Karma. It's looking likely that Sookie will have to kill her dear Bill, but the hilarious highlight of the episode is when we find out what (or more precisely who) is the cure for the Hep-V-infected vampires. Eric and Pam head to Dallas, battle the Yakuza, and make an unlikely (and unholy) alliance.

The best heist film ever made? We think so. Danny Ocean rounds up an ensemble crew of the best in the business to hit a high-profile target: the vaults inside Las Vegas casinos. A fantastic plot, a fabulous cast, and the glittering landscape of Las Vegas - what more could you want?

Signaling Risk. There are plans to increase efficiency and meet tight new deadlines, while a graffiti artist is brought in to design the company's logo.

Fishing. Selina spends an entire day making small talk with a rival presidential candidate, and finally decides which of her team gets to be her campaign manager.

Biscuits. After surviving the inaugural cake challenge, the 11 remaining bakers have to tackle biscuits. In tonight's episode, they make signature savoury biscuits that go well with cheese, Mary Berry's Florentines prove to be a tricky technical test, while there's a scandal during the three-dimensional biscuit showstopper.

The astounding cello duo - Luka Sulic and Stjepan Hauser - became a YouTube hit in 2011 with their cover of Michael Jackson's Smooth Criminal. Since then, they've played all sorts of rock hits - AC/DC, Guns 'n' Roses, Nirvana - as well as classical pieces. Cellos have never looked so rock'n'roll.

Brian Blessed: Who Do You Think You Are? BBC One HD, 9pm

In search of his ancestors and his beloved name, Yorkshireman Brian Blessed finds a great-great-grandfather whose life is worthy of a Dickensian tale, and discovers that his roots aren't as northern as he'd previously thought.

Video game adaptations have had a hard time, so it's no surprise that most of us went into Disney's Prince of Persia with low expectations. But with a bit of The Mummy and a bit of The Pirates of the Caribbean treatment thrown in, it ended up being more fun than we'd've thought. Jake Gyllenhaal, Gemma Arterton and Richard Coyle lead the cast, there's a fair bit of roof-hopping going on, and we can all agree that ostrich-racing should be an Olympic sport.

Sue Perkins chats with Dame Diana Rigg and comedian Mark Watson in front of a live audience and showcases a selection of the best comedy, cabaret and entertainment events from the Edinburgh Festival 2014.

Yes, it's back - the Premier League returns for another season and its BT Sport to get us underway at Old Trafford with this 12.45pm kick-off. United are expecting big things with new manager Louis van Gaal at the helm, while Swansea City will be looking to upset the odds in the battle to get off the mark first. And whoever wins this one will go top... if only for a couple of hours.

The first Sky Sports action of the Premier League season takes us to north London for a 5.30pm kick-off and a local derby. In one corner, Arsenal are buoyed by their first silverware in nearly a decade and have seen some top players come through the doors this summer. In their way on the opening day are a Crystal Palace who soared clear of relegation last year under Tony Pulis and will be confident of climbing the ladder this season.

The film that started it all. Marvel made a huge gamble in 2008 with the first instalment of their superhero franchise, and it seems like they've done pretty damn well. Robert Downey Jr makes his mark as Tony Stark aka Iron Man, a genius, billionaire, playboy, philanthropist who happens to become a superhero when donning a high-tech custom-made suit of iron that makes Inspector Gadget look like a glorified Swiss army knife.

Stick around for Saturday film night for a bleaker turn with Neill Blompkamp's superb and brutal film. After the initial welcome, extraterrestrials are segregated in a militarised ghetto in Johannesburg, South Africa. When the government tries to evict the aliens (known as 'prawns') from their homes, a government official becomes infected with alien chemical and has to rely on two 'prawn' friends in order to survive.

With the return of the Premier League season comes the return of sleepy Sundays camped in front of the sofa... if you're a football fan. The first Super Sunday of the season sees Liverpool take on Southampton, with the Saints perhaps wanting to exact revenge on their hosts for snapping up half their squad this summer. And following that, it's Newcastle United against reigning champions Manchester City.

Before Christopher Nolan was mind-bending everyone's dreams with Inception, he was mind-bending with Victorian magic tricks. Christian Bale and Hugh Jackman play bitter rivals trying to best each other with the ultimate magic trick: teleportation. When one of them cracks it, the other gets obsessed trying to find out how he did it, experimenting with dangerous new science to get his way. An excellent film with a great cast that includes Michael Caine, Rebecca Hall, Scarlett Johansson and David Bowie.

Also known as Crank: High Voltage, the sequel starts off exactly where the first film left off. Chev Chelios ('The Stath') falls off the helicopter, gets himself nabbed and taken to a makeshift hospital, where his superhuman heart is taken out and replaced with an artificial version and lo and behold - there's a battery pack attached to him. Battery runs out, heart stops. And so begins another crazy, adrenaline-fuelled race against time as Chev tries to get his heart back before he runs out of juice.

An American master chemist heads to London for the drugs deal of a lifetime, but he didn't count on the zany characters and web of deceit mucking up his plans. Samuel L Jackson heads the cast, but it's Robert Carlyle who steals the show as a fixer who just really wants tickets to a sold-out Liverpool match, while being shot at by an ex, who's a contract killer (Emily Mortimer) and with rival gangs trying to muscle in on the deal. Also stars Meat Loaf (no, really), Rhys Ifans, Sean Pertwee and Ricky Tomlinson.