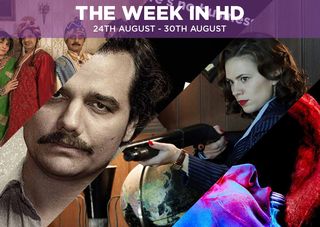 Lily James, Cate Blanchett and Helena Bonham-Carter shine in this lavish live-action adaptation of the classic Disney fairy tale. Kenneth Branagh directs, and he doesn't mess with the classics.

Unlike other recent adaptations (such as Snow White and the Huntsman, or Mirror Mirror), Branagh stays true to the original, and what you get is a wonderfully sweet, likeable and often magical tale. Lily James is convincing as Cinderella, but it's Cate Blanchett's wicked stepmother and Bonham-Carter's loopy fairy godmother who steal the show.

Buy Cinderella on Blu-ray at Amazon

Gary Oldman and Tom Hardy put on their Russian accents in this tepidly received thriller about a serial killer who preys on young boys. Hardy looks solid in the role, but the film itself rather plods along.

Buy Child 44 on Blu-ray at Amazon

Road Trippers vs Athenians. A trio of road-tripping enthusiasts compete with three fans of Greece in this fiendish and delightful quiz about finding connections between seemingly random objects.

Magnussen is a different breed of criminal from Moriarty, and is a despicable and fiendish adversary. It's a tense finale to the third series of Sherlock - the Christmas special can't come soon enough.

After winning the race to become the Mayor of Yonkers, Nick Wasicsko (Oscar Isaac) struggles as the housing order for 200 low-income houses splits the community even further.

Home Is Where You're Happy. David Duchovny is the detective tracking down Charles Manson and his family in 1967.

India Special 2015. Sanjeev Bhaskar, Meera Syal and the rest of the original cast reunite for a special one-off episode of this Award-winning British-Indian sketch show.

Featuring plenty of new sketches along with twists on old favourites, such as how the Kapoors became the Coopers, how the Indian Space Programme differs from NASA, and how the Taj Mahal could have been a completely different iconic design.

Desserts. The French classic crème brûlée is the signature challenge this week, and as the nine amateur bakers try to achieve that perfect wobble of the custard and sharp crack of the sugar (without using a blowtorch), we'll all try not to salivate over our TVs as crème brûlée is literally the best dessert ever.

The technical challenge is a deceptively simple combination of soft fruit, cream and meringue (Swiss and French) and decorated with fondant violets - the Spanische Windtorte from Austria.

And finally, three differently flavoured baked cheesecakes must be tiered to create a delicious and impressive showstopper.

The Number of the Beast is 666. The end of Hannibal is nigh. It's a shame the cancelled show going out on such a disappointing third series, as the second series was one of the finest pieces of television we've seen.

As the team lays a trap for Francis Dolarhyde, we wonder if Hannibal Lecter will make his escape yet again.

Open House. Fantastic drama following the intensely undercover lives of Soviet agents posing as an American family during the height of the Cold War in the 1980s.

Elizabeth and Philip get more involved with the CIA Afghan Group, finding themselves closer and closer to the inner circle.

The second episode in this live series, which sees the team on the hunt for one of the scariest predators in the ocean – the great white shark.

George Clooney pulls back on the charm as the dishevelled Matt King, a real-estate attorney whose life hits a number of roadblocks after his wife falls into a coma.

It's another wry but sincere film from writer/director Alexander Payne, as Clooney's Matt has to deal with the revelation that his wife was in the midst of an affair.

Clooney's the star but Shailene Woodley, as one of his daughters, is also very good in this funny, touching, beautiful-looking drama.

BK, NY. A deadly vampire/zombie virus is unleashed upon New York in this adaptation of Chuck Hogan and Guillermo del Toro's novel trilogy.

The second series of The Strain continues with the vampire hunters, the different strains of infection and the various races of vampires in its trademark gory and B-movie style. Good news for fans of the show - it's already been greenlit for a third series.

There's been plenty that's been said about the notorious Pablo Escobar, who was one of the weathliest criminals on the planet with an eye-watering $30bn.

But what's true and what's less so? This series from Netflix seems to merge both fact and legend, in a series that details the rise and fall of the gangster from Medellin. It's an interesting story that many have tried to tell before with little success.

Could Narcos jump to the top of the pile?

Arsenal know that a good start will enhance the chances of lifting the title come May, so a win at St James Park will be a high priority. Manchester City is the team to chase early doors, so a loss here will see Arsenal drop down the pecking order.

Sue Perkins takes a break from GBBO duties to present the highlights from this year's Edinburgh Fringe Festival.

The British Grand Prix. The MotoGP calendar takes us home to Silverstone, where we'll see if Jorge Lorenzo's new form is as unstoppable as it looks. The Yamaha racer's biggest competition is teammate Valentino Rossi - both are tied for points at the top of the leaderboard, but if Rossi wins, it'll be his 10th title.

Also available in 4K for those who subscribe to BT Sport Ultra HD.

Valediction. After last week's shocking events (we don't do spoilers here), it's up to Peggy to stop Ivchenko and Dottie from carrying out Leviathan's master plan in this exciting finale to Marvel's spy caper.

Stay tuned a second series, when the S.S.R. relocate to the glamorous but deadly city of Los Angeles - we can't wait.

N or M? Part Three. Even after snooping around at the opera, going undercover at a high-society weekend getaway, disappearing and nearly getting caught several times, Tuppence and Tommy are still no closer to finding out who the Soviet agent N is.

With the country under threat from nuclear war, the Beresfords must come up with their silliest and riskiest plan yet to catch the agent.