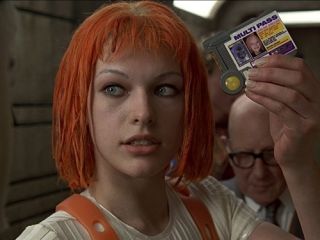 We hardly need an excuse to buy the limited edition steelbook version of Luc Besson's 1997 sci-fi hit. Evil forces are threatening to destroy the planet in a colourful 23rd century, and cab driver Bruce Willis and a special young woman (Leeloo) must join forces to save the Earth from an evil Gary Oldman.

Relive the critically acclaimed show's penultimate series, which is one of its best yet. Don Draper is back to his old ways, but finds it increasingly difficult to keep up with the changing times. Meanwhile Peggy and Joan move up in the world - it's an excellent series on the whole, and we'll be sad to see it go.

It's back! The most intense cooking show is back on our screens for a sixth series, and we can't wait to stare hungrily at all the scrumptious, inventive dishes over the next couple of weeks.

We start off with eight contestants facing the Invention Test in tonight's heat. Feared chef Monica Galetti and 'seasoned diner' Gregg Wallace look over the contestants' shoulders as they attempt to create a dish using strawberries, quinoa, artichokes, watercress, mushrooms, chocolate and mascarpone.

The dreaded (to the contestants) and the most exciting (to us) part of the show: the Skills Test. Four contestants have to calm their nerves and summon all their cookery expertise to create three perfect coconut tuiles - all in 15 minutes, with Monica Galetti staring daggers at them.

Then in the Classics test, Michel Roux Jr prepares a 'Classic Biersupp and Petit Choux au Fromage' – yes, that really is a beer soup with cheese-filled choux buns.

We Are Everyone. Taking inspiration from Assange and Snowden, this episode sees Holmes and Watson hunting down a civil servant who has leaked classified information online. But he's also a suspect in a murder case, and soon Holmes's entire life gets 'trolled' as he upsets the hacktivists.

Jonathan Rhys Meyers stars as the original vampire, this time disguising himself as a Alexander Grayson – an American entreprenuer who wants to usher in a new technological age in Victorian England. However, his real aim is take revenge on those who wronged him centuries ago, but his plans are put on hold when he falls in love with the reincarnation of his dead wife. Not a straightforwad adaptation of Bram Stoker's novel, this lavishly costumed and designed series has plenty of twists and surprises in store.

Armed with pigeon, trout, pancetta, cherries, pear and dark chocolate, the remaining contests have to show off their creativity and technical skills by cooking either a sweet or savoury dish. Only two will go through tonight.

FZZT. Floating bodies, an invisible killer, the team in danger – this looks like a stellar episode for the Marvel series. Let's just hope creator Joss Whedon doesn't chose this moment to inflict a character death upon us…

A mysterious young boy shows up in the spooky village, but as Abbie and Ichabod investigate further, they find out some unsettling truths about the child's shocking background.

Valencia. It's the final race of the season, and with the Moto2 championship already decided, it's the Moto3 and MotoGP races that are going down to the wire. There are only nine points between the top three in Moto3, but all eyes will be on MotoGP. Will Jorge Lorenzo hold on to his world title, or will rookie Marc Marquez make history by being the youngest championship winner?

We're hoping the punchline is Jeremy Clarkson showing up and destroying Hammond's efforts WITH A BIG HAMMER.

But it seems this is a rather more serious undertaking, using science and shiny computer graphics to show exactly what is needed to build the universe we live in, and all the elements needed to make it habitable for us humans.

Turning 40 has Karl questioning his existence and purpose on this planet, and he's on a mission to explore remote cultures to find some meaning in life. Ricky Gervais didn't have to force him, either. In this episode, he charts different career paths he could've taken, starting in Japan.