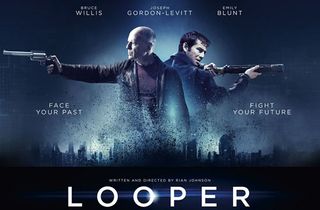 Welcome to The Week in HD, our guide to all the must-see TV shows, films, sports and Blu-ray releases to grace your screen over the next seven days. Apologies for being absent last week - which had the Great Comic Relief Bake Off and a new Top Gear episode - but we're back in business again, with some big news: the brilliant sci-fi film Looper is out in Blu-ray! There are plenty of other great shows on too, so read on...

Sometimes a film comes along that makes your spine tingle - something new, something ingenious, something with the potential of being incredible. Rian Johnson's Looper is just that: in the future, time travel will be invented, but it's illegal and on the black market. The mob uses it to send their targets back into time, where a 'looper' - a hired gun - takes care of them. One such looper is Joe, who finds himself in a tricky position when the man sent back is himself. With Joseph Gordon-Levitt, Bruce Willis and Emily Blunt, Looper is a brilliant and unexpected story that does time-travel right - it's sure to be a cult classic.

After confessing her love to Gary last week, Miranda's decided it's time for a change, and she's packed her bags to go off travelling - for reals this time. But will Gary be able to change her mind?

A repeat, but Jeremy Clarkson hosts tonight, with Kevin Bridges and Nancy Dell'Olio joining Ian Hislop and Paul Merton to take a satirical look at the news.

The highlight of the week - a full episode devoted to the life of Mary Berry, Queen of Bakes and the heart of The Great British Bake Off. Mary Berry charts her life from her childhood in Bath during the Second World War, to London in the 1960s where she got her big baking break.

This Clint Eastwood-directed biopic about J Edgar Hoover, the founder and first director of the FBI, takes a look at both his personal and professional lives, peppered with many triumphs alongside controversies. Starring Leonardo diCaprio.

Charlie Brooker is back on a weekly basis, tearing apart current TV, film, media and news with his particular brand of satirical and surrealist humour mixed with pessimism and rage at the world at large.

Demons. Themed episodes of Castle are always the best, and this Halloween special was a fun Ghostbusters/Scooby-Doo homage, with Castle and Beckett taking the classic Mulder/Scully roles of believer/sceptic when a TV ghost hunter presenter is found murdered while looking for paranormal activity in a haunted mansion.

Jargon. A repeat, but it's always fun to join Stephen Fry and Alan Davies with Jimmy Carr, Victoria Coren and Bill Bailey with interesting facts and banter about jargon.

Howard Goodall's Story of Music. Composer Howard Goodall takes a look at the musical period of 1650 to 1750, which saw the inventions of the orchestra, overture, symphony, modern tuning, concerto and piano - crucial for the musical maestros Bach, Handel, and Vivaldi who flourished in this time period.

Tonight, the boys go on a road trip across the Western side of the United States, from Las Vegas to California and then a race to the Mexican border. On the way, they tackle racing circuits, airborne attacks and a race against the American police in three front-engined supercars: Aston Martin Vanquish, Dodge Viper and Lexus LFA. The star in a reasonably priced car is Fleetwood Mac's drummer Mick Fleetwood.

Trinity. The supernatural housemates are back, but it's a completely new trio to start the new series. Long gone are Mitchell, George and Annie that started off the show; series 5 is all about vampire Hal, werewolf Tom and ghost Alex tackling their new status as housemates and dealing with each other's supernatural quirks.

While there's always a danger of the original trio being missed, Hal and Tom's unlikely but hilariously awkward and hostile friendship won over most of us last season, while Alex is cool and breathes fresh life into the series, despite being, um, newly deceased.