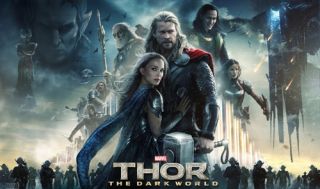 Also, check out our new Twitter account @WHFplaylist – home of our magazine's Playlist section. We'll be bringing you the latest news and reviews of our favourite movies, music, TV shows and games, as well as some tasty competitions that you can enter and win some shiny prizes.

(If you already follow us on @TodayinHD, not to worry – we've just changed the name! But please bear that in mind when you mention us.)

The sequel to Marvel's Thor goes bigger and funnier. All the realms are under attack from Asgard's old enemy Malekith and his band of Dark Elves, who want to plunge the entire universe into darkness. Jane Foster accidentally gets sucked into a wormhole and becomes infused with dark magic, while Thor has to team up with Loki to save the day. No seriously, it's big on comedy.

The disc incluces featurettes on the score of the film, on Loki and Thor's fractious realtionship (A Brother's Journey), a gag reel, the Marvel one-shot All Hail the King (starring Ben Kingsley in the little snippet above), and a first look at Captain America: Winter Soldier.

Series three of Peter Moffat's legal drama starts off with Clive (Rupert Penry-Jones) having finally taken silk, but his celebrations are cut short when the head of the chambers' son is arrested for murdering a police officer. Yikes. It's up to Martha (Maxine Peake) to defend him despite the evidence, and to figure out what actually happened.

The Joy of the Single BBC Four HD, 9pm

A love letter (well, documentary) to the seven inch vinyl 47rpm record, with nostalgic insights, clips and memories from the pop and rock music industry.

We've just discovered this funny, lighthearted murder mystery series set on the sunny shores of a fictional Caribbean town, and we can't get enough.

DI Goodman and his team are investigating a murder on a privately-owned island when a storm hits – meaning they're stuck in the house with a murderer. Can they solve the mystery before he or she strikes again?

Last Gasp. Is Reece Shearsmith and Steve Pemberton's macabre-comedy series the most interesting show on TV right now? We think so, and urge you all to iPlayer the four episodes so far.

In the fifth and penultimate episode, a very sick little girl gets a birthday surprise from charity WishmasterUK.

Joss Whedon's brilliant space-western series Firefly may have been short-lived, but it generated enough cult status to warrant one final gasp on the silver screen. When the Serenity crew cross paths with an assassin sent to kill telepathic River, they end up in the outer planets to find answers about her traumatic past.

Does the film tie up loose ends neatly? Of course not. It only serves as a reminder of a glorious story that will never be told. If only Whedon would just tell us what he had planned for the Mal & co...

Classic Hitchcock film, where a young couple investigate the mysterious disappearance of an elderly woman on a train from Switzerland to England. But when fellow travellers and train staff deny the existence of the woman, the couple wonder if there's a greater conspiracy in play.

Stop-motion animation and in black and white? It's Tim Burton at his finest. A heart-warming horror story about a young boy who brings his dead dog back to life.

Remake of Mel Brooks's musical about two corrupt Broadway producers who attempt to make money out of a flop. They get their hands on the worst play ever – titled 'Springtime for Hitler' – but will they get away with it?

Richard Hammond takes to the Yas Marina Grand Prix circuit in Abu Dhabi to finally test the new Porsche 918, and then goes head-to-head with the McLaren P1 tested (and favoured) earlier in the series. There are high stakes involved: if the Porsche beats the McLaren, Jeremy Clarkson has promised to change his name to Jennifer.

Elsewhere in the show, Clarkson and May show their concern for safe cycling by making an informed and informative film, and Breaking Bad's Aaron Paul is the Star in the Reasonably Priced Car to promote his new film, Need for Speed.

Tonight on The Musketeers, the unlikely quartet must help the common folk while also defending the royal family from assassins. Sounds familar? Yes, the show might be a little repetitive, but we can't deny those swashbuckling swordfights are pretty swish and exciting.

We also can't shake the feeling that Capaldi's moustache-twirling Richelieu will eventually snap and descend into an expletive-ridden fury that would fully justify the post-watershed slot.

Blackwater. The Battle of the Blackwater marks the largest battle during the War of the Five Kings, with Stannis Baratheon laying siege upon King's Landing to take the throne from the Lannisters. Will Westeros see a new king crowned, or does Tyrion Lannister have a cunning plot up his sleeve?