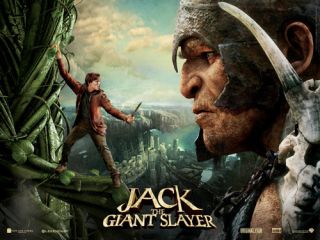 Hello everyone, and welcome to The Week in HD – our guide to all the must-see high-definition TV shows, films and Blu-ray releases to grace your screens over the next seven days. You can also get daily updates on what's on by following our twitter feed @TodayinHD.

The classic tale of Jack and the Beanstalk gets the blockbuster treatment in this modern retelling helmed by Bryan Singer. Boasting an impressive cast including Nicholas Hoult, Ewan McGregor, Stanley Tucci, Ian McShane, Eddie Marsan and Warwick Davis, it's a fun film filled to the brim with eye-popping CGI effects.

Releves. It's the penultimate episode, and we finally get a glimpse of what Hannibal has been working to since episode one. From gaining Abigail's trust, Will's friendship and Jack's confidence, Hannibal has been able to manipulate them all exactly to where he wants them to be – and that includes chipping away at Will's mind to make him (and everyone else) believe that he's capable of murder. Even worse, of being the Chesapeake Ripper himself…

In the last episode – has series three finished already?! – Luther is forced to work outside the law. He must prove his innocence and stop Marwood from his venegful killing spree before he's branded as a martyr. Abandoned by friends, and with Mary in danger, Luther has to make some impossible choices as Marwood is determined to make him suffer.

Prolific writer, director and actor Woody Allen is the topic of this insightful two-part documentary by Robert B Weide. In the first part, Allen talks about his childhood in Brooklyn, breaking out into the New York stand-up comedy scene, and the eventual forays into screenwriting and filmmaking that would one day make him a household name.

The Lives of Others. Using their own special brand of goofy charm and suspense, the cast and crew of Castle celebrate their 100th episode with a Hitchcock homage. With Castle cooped up in his apartment with a broken leg and only a pair of binoculars at his disposal, Rear Window-style, he suspects one of his neighbours has committed murder. The trouble is, no one believes the bored writer with the overactive imagination…

James Rhodes: Notes from the Inside Channel 4HD, 10pm

I absolutely love James Rhodes. At turns witty, cynical, romantic and bittersweet, the classical pianist puts his life and soul into his piano-playing. In this astonishingly frank documentary, Rhodes tells us about his struggles with depression, self-harm and drug abuse that put him in a psychiatric ward for nine months - until a friend smuggled in an iPod filled with classical music. Now enjoying a career he only dreamt of as a child, Rhodes returns to a psychiatric hospital after five years, taking a Steinway grand piano in with him. He shares experiences with the patients and plays individual pieces specifically chosen for them - in hopes of showing how music can change lives for the better, just as it helped him. Funny, moving, passionate - I'd urge you to give James Rhodes a listen.

In the second part of this intimate documentary, Woody Allen talks about the leading ladies of his personal life, and talks about his career-spanning films, from Annie Hall to Midnight in Paris (although I'm hoping personal-favourite-but-box-office-dud The Curse of the Jade Scorpion gets at least a mention). With contributions from Martin Scorcese, Diane Keaton, Scarlett Johansson and John Cusack.

Mindbending. Dara O Briain and his professors in crime are back for a second series of fun, interesting and sometimes mindblowing science that takes the kind of approach we would've loved at school. In the first episode, they take a look at the wonders of the brain and how much (and how little) we actually know about our main command centres. We then move quickly into sci-fi realms, seeing if computers can read our thoughts, and how illusions can manipulate our minds. And finally, did you know our insane weather is being influenced by a mysterious force?

"If you like jokes about how wonderful everything is, you've come to the wrong place." So states Jon Richardson's twitter bio, and true to the form, the relentlessly grumpy (but oddly charming) comedian brings his own brand of relentless cynicism and real-life-OCD to his acute and surreal observational comedy.

There is another, possibly better, solo-Wolverine film coming out later this year, but it might just be worth rewatching the first origin story of our favourite Canadian mutant. From his childhood to being one of the commandos in General Stryker's team, we get an action-packed glimpse of the events that shaped Logan into the adamantium-steel-clawed Wolverine of today. Liev Schreiber – as Wolverine's deadlier brother Sabertooth – is one of the better aspects of this movie, while Ryan Reynolds' Deadpool was another.

This Nicholas Cage/Jerry Bruckheimer flick is a proper 90s action popcorn-fest. When a prison transport plane (obviously named Jailbird) is taken over by the violent convicts, it's up to Cage to save the day, plane, and the officers taken hostage before the criminals are let loose upon landing. Also starring John Cusack, Steve Buscemi, John Malkovich and Ving Rhames.

The F1 season heads to Budapest for the always-eventful Hungaroring race circuit. It's here that Jenson Button and Fernando Alonso grabbed their first ever race wins, while the last couple of years saw accidents overshadowing the race itself. Will we see another tyre catastrophe that befell Silverstone?

Clarkson and May investigate a new type of hatchback – the 'crossover' – that's becoming increasingly popular. They take it for a caravan trip, and well, you know how these things end up. Elsewhere, Hammond tests two new Lamborghinis with excellent names: the Aventador Roadster and Sesto Elemento. And finally, we have a true rock star in the studio: Aerosmith's Steven Tyler is the Star in a Reasonably Priced Car.