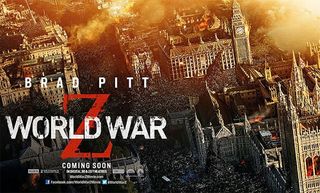 Those pesky zombies. Not content with shambling across North London (Shaun of the Dead) or taking over underground corporations (Resident Evil), they're now bringing about a global pandemic that only Brad Pitt can stop. Based on Max Brooks' multi-narrative novel, it's a zombie film on an epic scale.

That was quick. Anyone missing the first series of this gorgeously filmed and stunningly scored BBC drama series after its finale last week can rewatch it all over again on Blu-ray.

The series follows the stylish but violent Shelby family in their attempt to gain a solid and respectable hold over the bookmaking business in post WWI Birmingham. Nick Cave, The White Stripes and Tom Waits provide the musical backdrop, and Cillian Murphy and Helen McCrory headline a brilliant supporting cast. It's a must-watch.

The Stone Roses: Made of Stone Blu-ray

Shane Meadows documents The Stone Roses' return to music after 16 years. Featuring never-before-seen footage charting the band's success, as well as fan interviews and full access to their sell-out concerts in summer 2012, it's a fascinating window into the lives of one of Britain's most influential bands.

Election Night, Part 1. It's election night, and Aaron's Sorkin's fictional news team are in full swing. Of course, we already know the outcome of the 2012 presidential election, but the nail-biting news coverage as election night unfolds still brings home the tension.

The Final. This is it. The one we've been waiting for. There hasn't been a clear winner at all this series. The final three – Frances, Ruby and Kimberley – have had their share of ups and downs, so it's anyone's guess who'll become the 2013 Bake Off champion.

For tonight's extravagant final, the contestants put their signature stamp on a tricky picnic pie; tackle one final technical challenge in the form of 12 sweet and savoury pretzels; and push themselves to the max for the grand showstopper: a wedding cake. We can't wait.

Highlights from the all-important final race of the season, with Shane Byrne and Alex Lowes separated by just one point. Who emerged victorious at Brands Hatch?

The monster of the week is the Sandman – a creepy slenderman-like monster who tortures people in their dreams. The BFG he is not. And this particular nasty Sandman has his sights set on Abbie.

Sharks must really dislike Stephen Spielberg. Things just haven't been the same for them since this 1975 classic hit the silver screen.

Girl in the Flower Dress. Joss Whedon's Marvel spin-off show is going from strength to strength. An enigmatic girl in a floral dress leads Coulson and his agents to Asia to rescue another unusual-power-toting young man. Closer to home, new member Skye has a secret that might jeopardise her newfound relationship with the team.

Kate Winslet won her tear-drenched Oscar with her role in this critically acclaimed film. A young man (played by David Kross and Ralph Fiennes) finds out that the older woman he had an affair with nearly a decade ago is standing trial for her involvement in the Holocaust.

Jo Brand and John Prescott are the guests in tonight's episode, with regulars Ian Hislop and Paul Merton present as team captains as usual.

Random and repetitive, but totally addictive, countdown shows are one of the first signs that Christmas is just around the corner. But who doesn't love a bit of magic? There are tricks great and small here from the likes of Derren Brown, Dynamo, Paul Daniels, and my personal favourites, Penn and Teller.

In her BAFTA-winning role, Carey Mulligan stars in this coming-of-age story as a schoolgirl set for a bright future at Oxford in the 1960s. But her life takes a different turn as she is seduced by the attentions and lifestyle of a charming older man, played by Peter Sarsgaard. Also stars Alfred Molina, Rosamund Pike, Dominic Cooper, Emma Thompson and Olivia Williams.

Dictynna Hood's unsettling indie film is set against the stark and hauntingly beautiful backdrop of the Fens. Claire Foy is mesmerising as newlywed Dawn, who is struggling to understand the troubled relationship between her husband David (Benedict Cumberbatch) and his younger brother Nick (Shaun Evans).

Motegi. Last week's eventful Australian GP saw Scott Redding out of the Moto2 race due to injury, while the MotoGP main event was eye-popping, baffling and stand-up-in-the-middle-of-the-living-room exciting. We're in Japan this weekend for the penultimate race of the season. Can rookie Marc Marquez hold on to his championship lead for just two more races?

By Any Means BBC One HD, 9pm

I've cracked it: this show is like a cross between Hustle and Spooks. In the finale, the team has to race against the clock to stop a dangerous criminal from releasing a deadly new drug aimed at teenagers.