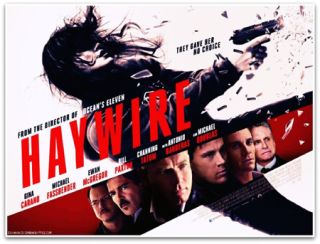 Welcome to The Week in HD, where we guide you through our favourite HD and 3D TV shows, films, sports and Blu-ray releases for the week.

We start today with exciting news: the first Skyfall trailer was released this morning, with Daniel Craig returning as 007 in the 23rd Bond film. It hits UK screens in October, and is looking pretty good so far.

As for this weekend: Monaco Grand Prix, Eurovision, and the TV Baftas. There really is no reason to leave the house with that line up; I know I'll be staying glued to the screen.

Here's our pick for the rest of this week:

Steven Soderbergh puts another ensemble cast together, this time with Mixed Martial Arts star Gina Carana in the starring role as a black ops assassin who gets betrayed by her employers, and spends most of the film fighting her way through an international (wo)man hunt.

Season 3 was fabulous with the deliciously evil Russell Edgington wreaking havoc in style across Bon Temps. Which makes this season's big bad being witches seem a bit...lacklustre. Head witch with a vengeance (played by Fiona 'Aunt Petunia' Shaw) is hell bent on destroying all the vampires, starting with giving Eric Northman amnesia. A good time to play catch up, as season 5 comes out soon, with Chris Meloni joining the cast as new vampire bigwig The Authority.

The Prince of Winterfell. With only two episodes left to go of this season, much of this episode is about putting together all the pieces to get ready for the final epic battle. Theon is reunited with elder sister Yara, and Arya strikes a deal with Jaquen to help get her, Gendry and Hot Pie out of Harrenhal while Tywin takes his army to meet Robb Stark. And has Catelyn set the Kingslayer free...?

Christmas Waltz. We really don't get to see much of Don and Joan together, but it's a good technique of having them banter only once in a while, as they're such highly charged personalities. We also get a build up to SCDP wanting to land the Jaguar account. Fingers crossed for plenty of screen time for gorgeous 60s Jags.

This week sees Martha in a court martial case, defending Captain Ed Ryan (guest star Matthew McNulty) who's been accused of disobeying an order that resulted in the death of a young private.

An unusual coupling, but an hour of Tarantino and Apple talking music and movies sounds quite interesting.

Vin Diesel and Paul Walker reunite to invoke the fun of the first film – this time putting more emphasis on a heist-gone-wrong scenario rather than street car racing. Dwayne 'The Rock' Johnson stars as a federal agent who chases them across Rio de Janeiro.

Colourful animation about the escapades of a domesticared rare macaw who gets taken to Rio to mate, but ends up in a series of adventures that sees him being smuggled, breaking free, and learning to fly. Jesse Eisenberg and Anne Hathaway lend their voices.

Jake Humphrey and the BBC team brings you all the qualifying action from the glitzy Monte Carlo race track.

The Death of the Doctor, Part 1. Sarah Jane is joined by the Third Doctor's other companion, Jo Grant, as they investigate the truth behind what really happened when the Doctor is declared dead. Katy Manning and Matt Smith guest star with the sorely missed Elisabeth Sladen.

They're taking the Hobbits to Isengard! Gandalf gets some shiny new robes, there's a huge battle at Helm's Deep, and the Ents start moving again.

Get comfy with plenty of junk food and alcohol as you settle down for more than three hours of so-bad-its-fun cheesy music, as the Scandinavians and Balkans all vote for each other while England sits in a corner and cries because it's an island with no friends. Sorry, England.

Engelbert Humperdinck is the best we can offer, and if anything, should get a prize just for that name. Taking place in Azerbaijan (last year's winners) Eurovision 2012 is hosted by Graham Norton.

BBC brings us live coverage from the most glamourous race track on the calendar, and who knows what could happen with this season being so wonderfully unpredictable?

Dara O'Briain hosts the 2012 Baftas for TV. If you're a long time reader of this blog, you'll know I'm a huge Sherlock fan, and I am both outraged that Sherlock didn't get a Best Miniseries nomination, and also delighted that Martin Freeman, Benedict Cumberbatch and Andrew Scott all got actor noms. Now they just need to win, please and thank you.

Writer Steven 'The Moff' Moffat gets a Special Bafta award tonight for his services to British TV, and Rolf Harris gets inducted into the Fellowship. Warning for next Monday's blog: if Sherlock doesn't win anything, I shall rant and cry; if they win, I'll throw confetti and kittens around.