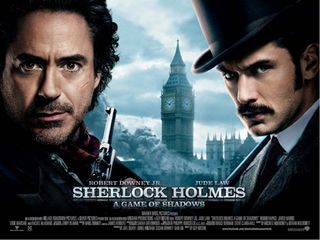 Welcome to The Week in HD, where we guide you through our favourite HD TV Shows, films, sports and Blu-ray releases.

With an eventful weekend that saw Chelsea and Manchester City crowned winners at the same time that Williams driver Pastor Maldonado became the first Venezuelan to win a Formula 1 race, it's rather quiet on the sports front this week.

Other weekend winners were the talented 15-year old cellist Laura van der Heijden who won BBC Young Musician of the Year 2012, and Simon Cowell finally got his wish as a dog act won Britain's Got Talent.

Here's our pick for this week:

Guy Ritchie's sequel is loosely based on The Final Problem, with Jared Harris featuring as Professor Moriarty. Stephen Fry and Noomi Rapace join the cast, with Robert Downey Jr and Jude Law continue their bromance. This instalment is more brawn than brains, but it's fun and has slow-motion exploding trees. The Blu-ray contains plenty of behind the scene features.

Steve McQueen's critically acclaimed and unflinching portrayal of a sex addict was making headlines before it even hit the big screen, but it's Michael Fassbender and Carey Mulligan's career-defining performances that steal the show. Beautifully directed and composed, it's a worthy follow-up to McQueen/Fassbender's previous collaboration on Hunger.

I just discovered this show last week, where they had this jet pack contraption that used water force to let you fly like Iron Man. Yeah. More cool gadgets tonight.

A Man Without Honor. Theon continues to butcher a few people to bring Winterfell to its knees, but he's clearly not killing any Starks. I rather want Jamie Lannister to be set free since he's one of the more fun evil ones from the House of Slytherin Lannister. Once again, the highlight of the show comes from Tywin Lannister and Arya Stark and their fascinating relationship.

Maxine Peake returns as newly QC'd Martha Costello, in the second season of the legal drama by Peter Moffat about the political intrigues and personal drama of being a barrister.

Dark Shadows. It's Thanksgiving 1966 and Betty Francis finally surfaces to attempt to wreak havoc in Megan and Don's actually quite happy life. Elsewhere, Peggy is still vying for respect as a creative when Roger goes to Ginsberg instead of her.

Supervillain Gru has the ultimate plan - to steal the Moon! Personally, I'd back him, but his evil heart starts to thaw thanks to three adorable little orphan girls.

This BBC2 sitcom with Simon Amstell playing a version of himself - a former TV presenter who's trying to get back on his feet while living at his grandmother's place - is unexpectedly hilarious.

Amstell's acting is questionable in light of a fine supporting cast, but his awkward and acerbic wit is complemeted by a tightly written script that's full of laughs. Tonight's episode sticks to real events as well, with Amstell making quite a gaffe on a live interview.

Will Smith stars as the lone survivor in this post-apocalyptic thriller where New York City is ravaged by a virus that's turned others into mutants.

More Lee Mack, with the finale for this series, as he and Lucy attempt to stay lucid while drinking homemade alcohol.

This show from 2007 sees the great Stephen Fry listing all of his guilty pleasures, from darts and Abba to swearing and hitting Hugh Laurie. Repeatedly. Fun fact: Fry recently tweeted that he and Laurie are currently working on a project together. Hooray!

No F1 this weekend, but Matt Roberts brings us round 4 of the Moto GP with live coverage from Le Mans.

First shown during BBC's 2009 Christmas run, this adaptation of Henry James' story about a young governess seeing ghosts that seem to threaten the young children in her care features pre-Downton stars Michelle Dockery and Dan Stevens.