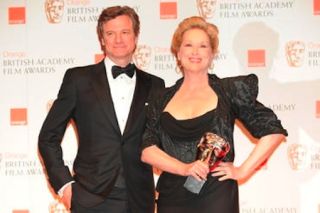 Welcome back to another week of HD and 3D films, TV shows, sports and Blu-ray releases.

Last night was a big night for film and music alike, with both the BAFTA Film Awards and the Grammy Awards taking place. Whitney Houston tributes poured in at the Grammys while Adele won pretty much half the categories.

On our side of the pond, Stephen Fry returned to splendiferous form hosting the BAFTAs, which saw The Artist yet again reign supreme, and Meryl Streep (above, with award presenter Colin Firth) get to the stage only marginally ahead of one of her shoes.

If you missed the BAFTAs, you can catch it on iPlayer, while higlights of the Grammys are on Channel 4 at 12.30am tomorrow, Tuesday 14th.

While I try (and fail) not to be bitter that Gary Oldman didn't win Best Actor, here's some highlights for this week to cheer us all up:

Transformers 3: Dark of the Moon – Blu-ray

You can now watch the Decepticons and the Autobots battling it out on the moon in the comfort of your living room, with this triple play release of the Michael Bay blockbuster.

One of the highlights of Christmas TV last year, this short animated film is the sequel to The Gruffalo, which debuted two years ago.

This story is about the Gruffalo's daughter who, despite her father's stories, sets off into the woods to find the big bad mouse, encountering some familiar faces along the way.

Helena Bonham Carter, James Corden and Robbie Coltrane return to lend their voices to this charming story, with Shirley Henderson starring as the Gruffalo's daughter.

The 1940 classic and its 1999 sequel from Walt Disney are glorious pieces of animation set to sweeping classical music - it's about time they were released in Blu ray. The Sorcerer's Apprentice, hippos in tutus, flamingos, Night on Bald Mountain, Tchaikovsky, Gershwin - that's my childhood right there.

First one-day international – can England shine at the short game?

Queen guitarist Brian May investigates the history of 3D, from the early days of stereoscopic photography to the cutting-edge cameras used today in films like Avatar.

The result of World War II rests in the hands of frail Brooklyn kid Steve Rogers (Chris Evans), after a top secret experiment turns him into a superhero. A visit from The Shield will be waiting for him...

Ignore the fact that Film4 are showing Twilight tonight, and instead delve into sweet nostalgia about the earlier innocent days of chatting to strangers online. Meg Ryan and Tom Hanks star in this adorable, witty and lighthearted 90s romcom - perfect for Valentine's Day.

The Power of Flowers - A look at how the early flowers sculpted the earth and drove the evolution of all animals.

The Berber Kingdom of Morocco - Gus Casely-Hayford visits Morocco, once the centre of a vast kingdom created by Berbers.

Pilot - Hit new US crime drama, inspired by the dark fairy tales of the Brothers Grimm. Detective Burkhardt finds out he's descended from a group of hunters called 'Grimm', who fight to protect the human world from supernatural creatures. Created by David Greenwalt, one of the co-creaters of Buffy the Vampire Slayer, this should be an interesting watch.

Samuel L Jackson plays an FBI Agent who's stuck on a plane full of snakes, back in the days when airport security was a bit more lax.

Another chance to see this stylish drama about the love affair between photographer David Bailey (Aneurin Barnard) and model Jean Shrimpton (Karen Gillan), and how they took the 1960s fashion scene by storm.

Penultimate episode of the drama series about three employees of a security depot who decide to pull off a daring heist. As their plans come together, the men find their lives are not getting any easier.

A bona-fide legend of stand-up whose energetic routines and hilarious observations put many of the new crop to shame, Lee Evans performs here to a sold out O2 arena.

And so the final episode has finally arrived for our group of loveable cons. While it hasn't been the same since Danny and Stacey left, I'll miss Mickey and the gang pulling off ridiculously ludicrous and brilliant long cons. Will they be able to retire from the game with a luggage full of cash and plane tickets to Monaco, or will someone finally outwit them? Oh come on, Mickey always has something up his sleeve...

A horror classic that spawned too many sequels. A group of teenagers believe they've cheated death, but they realise how silly that thought process was when Death stalks them to, well, death.

In this remake of the sci-fi classic, alien Keanu Reeves is sent to Earth to warn humans to stop killing the planet. But when he's attacked, he decides to eradicate mankind instead. In other words, Neo is not a happy bunny.

Considered the greatest realist painter since the Second World War, Lucian Freud agreed to this documentary award-winning director Randall Wright only months before his death in July 2011. Broadcast wit coincide with the long-awaited exhibition at the National Portrait Gallery this month, the film explores the life and work of Freud.

The Graveyard Shift - Annie forces Hal to join Tom in working at a cafe, while she struggles to keep baby Eve safe from evil vampires.