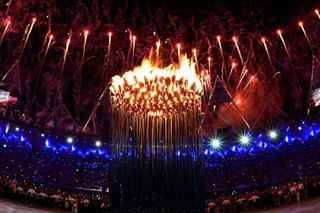 Welcome to The Week in HD - our guide to the best high-definition films, TV shows, and sports to grace your screens. Sadly, the Olympics are over after two glorious weeks, and while the Paralympics are on in two weeks' time, have some cookery shows and new original dramas in the meantime.

Once the sport stops, all the cooking shows begin again! Four celebrities are faced with the mystery box test and a challenge to cook pasta and pesto in 10 minutes. Easy.

We're not going to let go of the Olympics that easily. Here's a look back at the last two weeks and all the accomplishments achieved by the athletes - have tissues ready for the moving montages.

Amy's Choice. Toby Jones guest stars as the mysterious Dream Lord, who traps the Doctor, Amy and Rory between two realities: one where they're stuck on the Tardis and hurtling towards a frozen star, while in the other one Amy and Rory are married in Ledworth and being attacked by alien-possessed old people. They must spot the dream world to escape, but which reality will Amy choose?

Scrumptious cakes and breads and desserts oh my! Sue Perkins and Mel Giedroyc return with twelve bakers battling to be the best baker of them all. There should be a Red Button option where we can actually taste all the cakes...

The critically acclaimed drama series from Jimmy McGovern returns and tonight's episode stars Sean Bean as a school teacher whose transvestive alter-ego leads him to a love triange that ends in a crime of passion.

Pilot of this JJ Abrams and Jonathan Nolan series - yep, those two, be prepared for lots of plot twists - sees former CIA agent Jim Caviezel recruited by reclusive billionare Michael Emerson (Ben Linus!) who's built this crime-predicting machine, and they aim to catch the criminals before the crime's happened. Think of it as Minority Report but with Lucius Fox's technology and Lost-levels of conspiracy.

For anyone who's wanted to watch Luther from the beginning (myself included) here's our chance - the first season is being repeated, with Luther being brought out of suspension to solve a double murder. Starring Idris Elba and Ruth Wilson.

Lenny Henry and Kirsty Young host this event celebrating the achievements of the UK's emergency services and highlighting the work of some extraordinary individuals.

Drama about the birth of the Paralympics in 1948, when Dr Guttman changed the lives of paralysed soldiers by introducing sports as rehabilitation, leading to the first Paralympic event taking place on the same day as the opening of the London 1948 summer Olympics. With Eddie Marsan, Rob Brydon, and Niamh Cusack.

Date. Hey look - the first season of Miranda is repeating on telly! Such fun. Miranda has her first ever proper date tonight, but her plans of getting 'girly' don't pan out so well.

The Boy in the Striped Pyjamas - BBC HD - 9pm

A touching story of the friendship between two young boys during World War II. Bruno, the son of a high-ranking German officer, and Schmuel, a Jewish boy held captive in Auschwitz, are literally separated by a barbed-wire fence: they strike up a friendship against all the odds, but circumstances lead them to an end that guarantees to rip your heart apart. With brilliant performances from young actors Asa Butterfield and Jack Scanlon.

Highlights from this year's festival in Hyde Park - the one that got curfewed - with performances from Bruce Springsteen, Soundgarden, and Iggy and the Stooges.

Angelina Jolie is kick ass as usual as a CIA agent accused of being a Russian mole. Also stars Liev Shreiber and Chiwetel Ejiofor.

Relive the glorious season of 2009, where not only did F1 return in style to the BBC, but it was also my first year of watching F1, and my team won! Hooray for one perfect year for Brawn GP, and for Jenson Button winning the world championship. Also, please bring back refuelling.