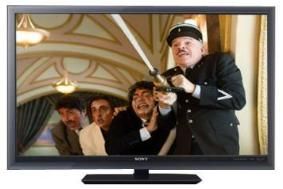 The sets were announced at the company's Open House Trade show, where it also rolled out new AV receivers, Blu-ray players and home cinema systems.

Available in 40in, 46in and 52in sizes, the sets are Full HD, use the company's Bravia Engine 3 picture processing and, as well as the internet access are also DLNA-compliant, allowing content stored locally to be streamed to the TV.

An Ethernet connection is used to access Sony Bravia Internet Video content using an existing broadband connection. The service claims to offer "one of the largest selections of free and premium movies, TV shows, sports, music and more from an array of partners like Amazon Video On Demand, YouTube, Yahoo!, Sony Pictures, Sony Music and many others."

Bravia Internet Widgets
In addition, Bravia Internet Widgets, provided by the Yahoo! Widget Engine, allow the user to interact with your Internet content such as Yahoo News, Video, Finance, and Flickr while watching TV shows. As Sony puts it, "Track your favorite sports team, check your stocks, and share photos with friends and family as you watch television."

The DLNA compliance enables access to digital photos, music and video stored on a PC or other DLNA server, via the TV's Xross Media Bar interface and remote control. There's also a USB input for displaying digital photos or playing digital video and audio files from compatible USB storage devices.

Slimline soundbar
Launched alongside the new TVs is a slimline HT-CT500 3.1-channel soundbar speaker system, which goes on sale in June. More details of that, and Sony's DVD home cinema in a box systems, in our Open House coverage here. There's also a complete round-up of the 2009 Sony AV receivers, and details of the new Sony Blu-ray players.