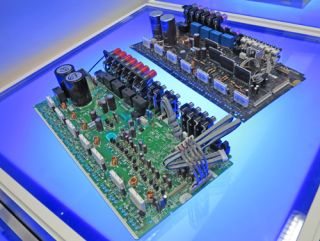 Spent an hour or so with Sony's Eric Kingdon here at the High End Show, while he took me through the design of the new Sony STR-DN1040 receiver, on sale from next month.

We've already reported on the two new models coming from Sony, but a chat with Eric enabled us to get a bit deeper inside the new models, and understand the kind of work that's under the lid – not least of which is a completely new main board, with upgraded devices throughout to make it not only better sounding, but more resistant to external interference.

The board used in the last generations of Sony products – to the rear in the picture above – was paper-based, and prone to flexing and eventual cracking under duress. It's a common material in products of this kind.

New for the STR-DN1040 is a much more rigid resin-based board construction, and to prove the point Kingdon plucks the board out its display case and throws it on the floor.

It causes a bit a stir in the packed room – who is this very tall white-haired Englishman in a Sony polo-shirt, throwing bits of the product about? But Eric has proved his point; the board clatters a bit as it lands, but remains intact.

He also explains the use of upgraded capacitors for the power supply, and the super-rigid chassis, with extra cross-beams to reinforce it, and proper isolation feet instead of the extrusions of the cheaper models, and the special laser-cur resistors.

It's all about giving the receiver improved dynamics and resolution, especially with music – but then Kingdon is the person I watched on the plane out to Munich unwrapping his new issue of Gramophone, then studiously reading through it, marking off intended purchases.

And talk to Eric about high-resolution music downloads, and the interest in DSD streaming that seems to be a trend at this show, and you see how important music, played via Sony's receivers, is to him.

Along with the current AirPlay/DLNA/internet radio capability, and the tie-up with the Berlin Philharmonic to stream live concerts and archive performances, Kingdon says there are further plans in the this direction, which he can't discuss yet.

I'd like to press him further, but I'm worried he'll start throwing circuitboards at my feet again…