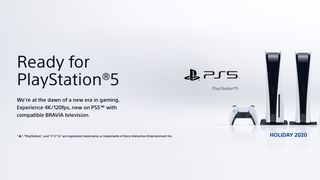 One of the biggest features of Sony's forthcoming PlayStation 5 (and the Xbox Series X) is support for 4K resolution gameplay at 120 frames per second (and 8K at probably 60fps), so naturally PS5 (and Series X) owners will want a 4K/120fps-ready TV that can make the most of that promise of super-sharp, super-smooth gameplay.

While the current choice isn't as vast as you might think, many new TVs do support 4K/120fps over HDMI. (This resolution and frame rate pairing is actually a HDMI 2.1 feature, although just because a TV supports HDMI 2.1 doesn't necessarily mean it supports 4K/120fps, and vice versa.) These compatible TVs include LG's 2020 OLED TV range, most of Samsung's 2020 QLED TVs (bar the entry-level Q60T range and the 49in Q80T model) and a couple of Sony's 2020 TVs...

Sony has today announced that it is branding the current Bravia TVs best optimised for the new console with the ‘Ready for PlayStation 5’ tagline. These comprise Sony's XH90 4K LED TV range and ZH8 8K LED models, which will both support 4K at 120fps via a future firmware update that, you'd hope, would arrive by the time the PS5 arrives in 'Holiday 2020'. Strangely perhaps, many of Sony's 4K TVs - including the excellent A8 OLED and XH95 LED – only support 60fps at 4K resolution, only capable of the 120fps rate at 1080p.

The XH90 can display 4K at 120fps images with a low input lag of 7.2 milliseconds (based on based Sony's internal testing conditions), while the ZH8, in addition to that, will also be able to make the most of the PS5's 8K support (again via a future firmware update) – although who knows how many 8K PS5 games will actually be available!

Both TVs also sport Bravia Game Mode, too, which automatically kicks them into low latency mode, and also allows owners to power up both them and the PS5 console and controller together and control them using only the TV remote.

HDMI 2.1: features, specs and news about the latest HDMI standard