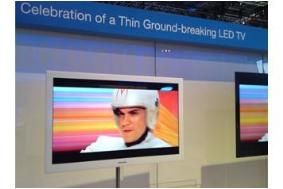 They'll be compatible with all high-definition audio formats and will go by the model numbers HT-AS730 and HT-AS930. We'll bring you a full run down of specifications and pricing as soon as they become available.

Samsung will also be launching a soundbar without DVD, the SB1, and a second model with a wireless subwoofer known as the WS1.

Perhaps more intriguingly, we've also been given some more information on Samsung's HT-BD8200 Blu-ray-playing soundbar. It'll hit the shops in July and should cost £699.

That new TV line-up in full
Samsung has also released a few more details on its new ranges of TVs:

8000 Series – high-end model with aluminium stand, Internet@TV 200Hz picture processing and will be available in 40 and 46inch

Series 6 screens are all Full HD models, available in 42 and 50inch sizes and feature Internet@TV too.

Series 5 sets are available in 42 and 50inch, as are Series 4 models. The former are Full HD, resolution, while the latter just HD ready. Neither has Internet@TV functionality.

Pricing hasn't been confirmed for any of Samsung's new TVs, but they'll be on sale towards the end of March/beginning of April.