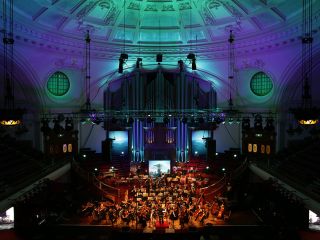 Now in its seventh decade, Sennheiser manages to twin extensive experience with youthful vigour and audaciousness.

Throughout, we heard soundbites you’d expect from a confident company with such rich heritage. Sennheiser spoke of forging ahead with a new benchmark of excellence and entering a phase of even higher ambition, producing iconic products that have revolutionised the audio industry.

For the most part, though, the theme was far more down to earth. This wasn’t an event about shiny trinkets and gadgets, but more an effort to emphasise the human aspect of audio and technology — the capacity to surprise through constantly improving the emotional impact great sound can provide.

Although the mystery product will no doubt be part of this equation, Sennheiser’s plans regarding immersive audio go further. While guests listened to the orchestra play Philip Glass and György Ligeti, and then Imogen Heap perform her favourite tracks with the help of a small band and gesture-driven gloves, the entire concert was being recorded in 9.1 audio. This immersive 3D technology should form a new foundation for Sennheiser’s ongoing “pursuit of perfect sound”, in recordings being as close to — or perhaps even exceeding — the original experience.

“We’re in the emotions business,” the company said; and it’s that as much as anything you feel can reshape excellence.

For audiophiles, there’s a good chance Sennheiser’s event was a mere sidenote to the unveiling of a new and mysterious product. A name wasn’t revealed, and nor was a price.

Atop a slab of finest Carrara marble (of the kind Michelangelo once used, albeit not for sculpting audio kit), two black boxes sat. On activation, knobs extended, valves rose up, and a lid opened, revealing headphones guests were told would be a “new benchmark in excellence”, with a frequency range “hearable only by an elephant and bat combined”. Attendees’ wallets screamed in unison…

At Reshaping Excellence, Imogen Heap was in tune with Sennheiser’s thoughts regarding the intersection of emotion and technology. She began with a special orchestral arrangement of Can’t Take It In, performed alongside the Junge Deutsche Philharmonie orchestra. Heap then played new arrangements of old favourites, combining stunning vocals with adept backing, and gestural performance with Mi.Mu gloves.

The highlight was new composition Tiny Human. Composed for the event, it offered parallels between Heap’s daughter reshaping her world — “I can barely remember life before you came crashing in!” — and Sennheiser’s attempts to do the same through sound.