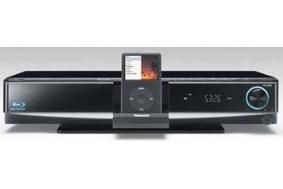 He went on to explain that the range features two tuners, both Freesat and Freeview, mentioning that the Freeview tuner also analogue capability built-in.

Recordable Freesat products were talked about, too, Panasonic saying it was considering PVR options for the future. It pointed out that, at present, Freesat HD broadcasts can only be recorded in standard definition.

In the famed Studio 2, once home to recording sessions by The Beatles and Pink Floyd, Panasonic revealed the SC-BT100 Blu-ray-in-a-box home cinema system (below).

As well as Viera Link technology, the system has a simple set-up mode and an iPod link, which allows you to place your iPod in front of the Blu-ray slot and control it via the main remote. Playlists, albums and all MP3s are sucked from your iPod and displayed on the TV screen in an iTunes style format.

We're expecting a sample of the DMP-BD50 in the office tomorrow and a full review will follow.

Completing the line-up is the SA-BX500 AV receiver, due later this month. Claiming 7 x 130W output, it can handle both Dolby TrueHD and DTS-HD MA audio formats and allows both biwire and biamp configurations.

Three HDMI inputs are accompanied by six more AV inputs, and the receiver is billed as iPod ready, though you'll need a dock.