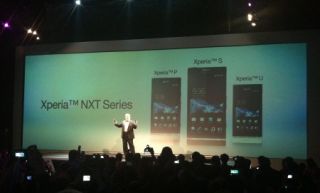 At the first official press event of Mobile World Congress 2012 in Barcelona, Sony brought together the three new smartphones and also announced that the previously US-only Xperia Ion, launched at CES, would come to the UK and Europe.

The new Xperia smartphones are due out in the middle of Q2 this year and sit beneath the flagship S, on sale now, offering more compact and more affordable smartphone options, albeit with lower spec.

All three of the Xperia NXT mobiles have dual-core processors, run Android with Sony tweaks, and access to Music Unlimited and Video Unlimited. Only the flagship Xperia S can access the PlayStation network of games.

They all share the same design touches, including a transparent element at the bottom of the screen that changes colour according to what's on screen, and a detachable base, again with a choice of colours.

The Xperia P sits beneath the flagship Xperia S, and has a 4in display, and Sony's new WhiteMagic screen technology for "twice the brightness of normal smartphones", an 8MP camera and video recording in full HD.

WhiteMagic, which offers brighter images in direct sunlight - supposedly without drawing more battery - is for now only on the Xperia P.

There's also NFC technology integrated, which can be used with Sony's SmartTags. These circular wireless tags can be placed anywhere around your home and loaded with a set of phone settings.

Tap your phone against a tag and your phone will instantly switch to those settings. So hang a SmartTag by your door, tap it as you go for a run and your GPS will be turned on, music will start to play etc.

The Xperia U (above) is the smallest Sony mobile, with a 3.5in screen, 5MP camera, dual core 1GHz processor and the same illumination bar and choice of caps.

Available in a choice of finishes, both new Xperia NXT smartphones are due out in the middle of Q2.

The Xperia S is on sale now and boasts "everything in HD", with a 4.3in screen, full HD video capability and the full range of Sony Entertainment content.

We'll be posting a blog with some hands-on pictures so you can see the new Sony Xperia smartphones in more detail.