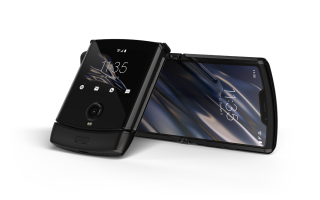 Put those fond memories of 2004's dinky LCD-screen and T9 keypad to one side, because Motorola's new Razr device has been unveiled, bringing with it the kind of innovation that'll give Samsung's Galaxy Fold or the Huawei Mate X a serious run for their money.

While featuring the same 'flip' factor of the original Razr, the 2019 version replaces the old keypad and small display with a 6.2-inch foldable plastic OLED panel, Android 9 Pie and Bluetooth 5.0 – and it'll be the first clam-shell (or flip phone) to feature a foldable screen.

There's also a smaller screen on the outer shell, which the firm is calling a Quick View display. It will show notifications and can also be used to reply to messages (using either a voice reply or fixed response), make contactless payments and accept calls.

The 2019 Motorola Razr will be available for pre-order in the US from 26th December, retailing for $1,500 (about £1168), and will become available in January 2020. In the UK, the Razr will be exclusively available on EE, with pre-orders opening on the same date in December. Early orders will also be taken in the EU, Latin America, Asia, and Australia on 26th December, with other markets coming later.

Motorola accounts for only a small, 2 per cent chunk of the smartphone market these days, having been acquired by Chinese giant Lenovo – from previous owner Google – back in 2014. Nevertheless, the new model is shining a spotlight on the once highly-popular brand.

Motorola is calling its new Razr an “impossible” feat of engineering, with a fold that closes completely flush. (Samsung’s Galaxy Fold has a gap between each screen when folded).

As reported by the BBC, Glenn Schultz, the Motorola head of product development, said of the design: “Our zero-gap hinge allowed us to bring to market a device that folds completely in half. Many didn’t believe we could do it, but let me tell you, it's fun to work on something that everyone thinks is impossible.”

Best smartphones 2019: the best phones for music and movies