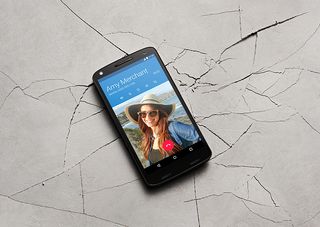 Motorola has unveiled a new flagship phone, the Moto X Force. The name refers to the amount of effort it will take to break the screen, because the company claims it is the world’s first shatterproof display.

The company is so sure of its Moto Shattershield that it guarantees against cracking and shattering for four years. The phone is also water resistant (but not waterproof). That means a stroll in the rain, not a dip in the pool.

Under the glass, there’s a 5.4in Quad HD (2560x1440) AMOLED screen with a pixel density of 540ppi. It’s not just the screen that’s packed with pixels, however – there’s a 21MP camera at the back and a 5MP wide-angle lens at the front, complete with its own flash.

It will run Android’s 5.1 Lollipop software, with Android 6.0 Marshmallow promised for the near future. Driving everything is Qualcomm’s 2.0GHz octa-core Snapdragon 810 processor, 3GB of RAM and a massive 3760mAh battery, worth a claimed 48 hours of average use.

The battery benefits from an updated version of Motorola’s TurboPower charging. A charge of 15 minutes promises 13 hours of battery life. The phone also offers wireless charging, compatible with QI and PMA type technology.

Fans of expandable memory, rejoice! There is a microSD slot for cards up to 2TB. That’s on top of the 32GB built-in storage of the base model.

Moto X Force is Motorola’s most advanced phone, and sits at the top of the range above the newly launched Moto X Style.