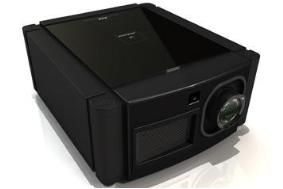 The two units, which will only be available as a package, work together to upscale and project any digital video source, from 480i up to 1080p, in full 10-Megapixel resolution. That's ten times the resolution of standard HD TV, and five times greater than 1080p 'Full HD' images.

The projector itself is powered by a PKI Xenon lamp, delivering up to 4000 lumens, and thus able to light even the largest screens to Hollywood reference levels.

It also has a native contrast ratio of 10,000:1, and every projector is calibrated individually in a process that takes over four days, the company says.

Four different projector/scaler packages will be available, each using a different lens system. The Short, Medium and Long-Throw versions will include a motorised 2.35:1 Cinemascope lens assembly, while there's also a Very Short Throw version designed for back-projection and simulator applications.