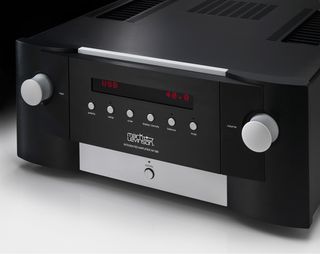 The No.585 is the first of 17 products to emerge from Harman Luxury Audio Group's new state-of-the-art engineering facility in Connecticut, US and arrives in December for a cool £10,500.

Robert Lardon is general manager of Harman Luxury Audio Group and describes the No.585 as a "Swiss army knife product" simply because of the number of things that it's able to do.

In addition, Harman implemented its own proprietary Clari-Fi processing technology designed to apply signal-enhancement to any compressed music file format to boost the sound quality.

Meanwhile, the No.585 has six digital and four analogue inputs – including USB, optical, coaxial, AES/EBU XLR and RCA. There's also a stereo pre-amp/sub output to expand your system.

In terms of the design, the No.585 can be operated via its dual front-panel knobs and six function buttons or using its remote control. The aluminium panel has a two-tone black and silver finish.

And following the launch of the No.585, we're expecting to see the Mark Levinson No.585P with built-in phono stage appear in 2015 as more products start to emerge from Connecticut.