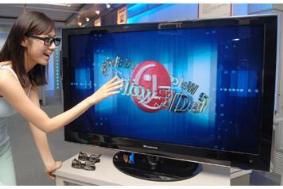 At a press conference in Seoul yesterday LG announced its sales targets for 3D TVs over the next couple of years – and the numbers are pretty staggering.

LG plans to launch a full line-up of 3D TVs in the second half of next year, and aims to sell 400,000 units by the year-end.

And that's just the start: in 2011 it plans to expand those sales to 3.4m units, which should give it a pretty substantial chunk of the total market.

Its TVs will use the shutter-glasses technology also being promoted by Panasonic and Sony, and the company has already agreed a partnership with Korea's Sky Life satellite TV service to run trial 3D broadcasts in the New Year.

At the moment LG only sells one 3D-ready TV: the 47in 47LH50 is aimed mainly at the commercial sector, rather than domestic use. But the Korean company's announcement is bound to cause the odd shudder among its Japanese rivals.

Panasonic is making a major investment in its 3D launch, while Sony has already said 3D will play a major part in reviving the fortunes of its ailing TV division. It says up to 50% of its TVs could be 3D-capable by 2013.

LG's plans nevertheless account for a relatively small proportion of its LCD TV ambitions: next year it expects to sell some 25m LCD TVs worldwide.