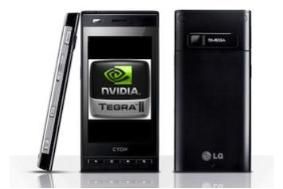 The new phone will be part of the company's Optimus range, and will run the Android operating system on Nvidia's Tegra 2 processor, the world's first dual-core processor for mobile phone use.

Most smartphones currently run on single-core 1GHz processors, but the LG model will make use of the dual 1GHz capability of the Nvidia unit.

That should make it up to five times faster for gaming applications, LG says, as well as allowing HD video playback and 3D capability.

Ma Chang-min, VP of the company's marketing strategy team, says that 'LG is committed to making its Optimus Series smart devices the de facto standard in speed and graphics performance.

'Smartphone processors will be a buzzword in the industry as it is closely tied to factors people consider when purchasing smartphones, such as the processing speed of downloaded applications.'