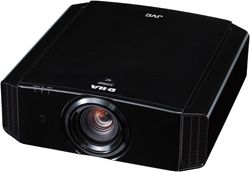 The entry-level model in JVC's 2012 range is the DLA-X35, which is a standard 3D projector without the 4K upscaling option.

There are new active shutter 3D glasses, too, using RF rather than IR technology, aiming to provide more stable synchronization and extended range.

A new lamp and power supply claims to boost the level of brightness, while the native contrast ratio has been improved too through the use of a new polarizing grid.

There's also a new app for smartphones and tablets offering remote control of the projectors.

The DLA‐X95R and DLA‐X75R feature full color management, ISF certification and advanced calibration functionality. In addition, JVC says they are designed to achieve THX 3D Certification and are scheduled for THX testing.

The new JVC D-ILA home cinema projectors will be available from November 2012.