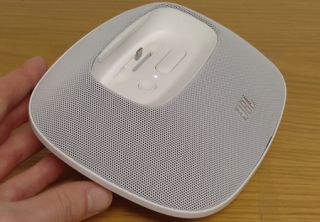 The world's first iPod speaker docks with the new Apple Lightning connector have been revealed by JBL, the JBL OnBeat Micro and the JBL Venue LT.

Both sport the new Lightning connector to work with the new iPhone 5, the new 5th-generation iPod Touch and the new 7th-gen iPod Nano.

The Lightning connector rocks back and forth on the dock, with any connected device seeming to rest back against the OnBeat Micro. It doesn't feel that sturdy but will make it easy to connect different sized devices.

The larger JBL Venue LT will also work with the iPad Mini, though the OnBeat Micro, which is a smaller, portable dock, doesn't support the tablet.

We've had our hands on the OnBeat Micro already, and you can see our pictures below alongside our hands-on video below.

The JBL OnBeat Micro is £80 and due on sale on December 1st. It can be mains or battery-powered, with four AAA batteries delivering 5 hours of sound.

There's a USB audio input for connecting other Apple devices, which will charge and play music from older Apple products.

You'll also find a 3.5mm input for connecting other portables.

The £200 JBL Venue LT, set to go on sale by the end of the year, also has the Lightning connector and supports the iPhone 5, new Touch and Nano, and the new iPad and iPad Mini.

Both new JBL docks will come with a new JBL app with added functionality, remote control functions and EQ settings.

Look out for our video later today, and our exclusive review of the JBL OnBeat Micro later this month.