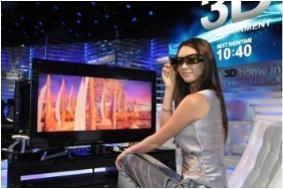 Akira Shimazu, who leads the company's 3D&BD Project Management Division, says that while rivals have only announced hardware, Sony also has a substantial investment in the content business.

Speaking to Japan's Nikkei Business Daily, Shimazu said that the combination of hardware and software is Sony's main weapon in the fight for 3D leadership.

He said that "We cover all content businesses, from movies to games. Previously, broadcasting was the only area we did not have a presence in, but that has been taken care of through joint ventures with other firms.

"No other Japanese or South Korean electronics makers have invested in the content business. At other companies, 3D TV operations have been led by their TV units.

'3D won't happen without Sony'
"For us, on the other hand, all divisions have been involved in the 3-D business, including Chairman Howard Stringer. 3D TVs will not become a full-fledged market unless Sony, which has both software and hardware operations, enters this arena."

Asked whether a major reason for the introduction of 3D TVs was as a means of tackling falling flatscreen TV prices, Shimazu said that "The market for 3D TVs will probably not start growing in earnest until the year-end sales season this year.

"But from then on, prices will likely stop falling for a year or so. An end to the price slides alone would be enough to create big profits for us.

"3D TVs themselves require only upgraded software, so we don't have to worry about expensive parts pushing up overall costs. The only thing that would push up overall costs would be the production of special glasses for viewing the TVs."

Glasses not a problem
He told the Nikkei he's not worried about the reluctance of some consumers to consider wearing the special active glasses required for 3D viewing: "Wearing these glasses might not be suitable for people who are doing other things while watching TV. Just as PCs take time to start up, people will need time to get used to wearing the glasses.

"Even for those who think the need for glasses will hamper the widespread use of 3D TVs, there must be some content they would love to try watching in 3D, such as movies or sports, for example."

'Unthinkable that 3D will fail'
And will 3D succeed this time around, having been tried in cinemas before with varying success? "Past 3D booms did not last because the main idea was to surprise audiences with pop-up images.

"Given that Hollywood film studios have been introducing a number of 3D movies, and that 3D TVs are not that expensive, it's unthinkable that the new 3D technology will fail to make a splash.

"That the market will grow is certain; the only question is whether the growth will be fast or slow. According to one estimate, 1 million 3D TVs will be sold in 2010. I think the figure will be even higher, and Sony aims to secure a top market share. Sales growth will be big in 2011."