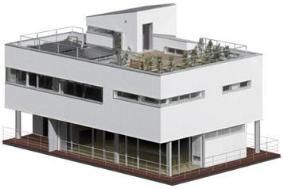 That's the view of company president Fumio Ohtsubo, who says that Panasonic is transforming itself into a company creating products driving what he calls the "worldwide green revolution".

Speaking at a meeting in Osaka to announce the company's latest earnings, he announced that it would start selling eco-homes around the world in the first half of the next decade, combining Panasonic fuel-cells, Sanyo's solar panels, and lithium ion batteries for energy storage.

Panasonic already uses Sanyo solar panels, plus its own fuel-cells, among the alternative energy sources at its showcase Eco Ideas House, part of the Panasonic Centre complex in Tokyo's regenerated waterfront area.

Using the technology incorporated into this house, the company says it can already reduce household emissions of carbon dioxide to 47% of 1990 levels, with even greater savings possible in the near future.

The combined Panasonic/Sanyo company will also have tie-ups with half the world's major car makers for the supply of batteries for electric vehicles. Together the two will have over 40% market share for lithium ion batteries, and around 80% share in nickel-hydride batteries in the USA and China.

It's thought Panasonic/Sanyo will work to eliminate overlaps in product ranges both 'white goods' – domestic appliances – and AV equipment, as well as working on more energy-efficient products.

Analysts are also suggesting this may also be the first of a series of takeovers of this kind, with increased global competition forcing the creation of larger companies, rather than the traditional Japanese method of tie-ups between companies in specific product areas.

– Sanyo shares have fallen heavily in trading on Japan's stock market since Panasonic's announcement of its Y131/share tender bid. The price dropped over 25% after the announcement, to Y158, compared to a year-high of Y279, and a ten-year record of Y1060.

It's thought the fall is linked to speculators, who had anticipated a higher Panasonic bid, offloading their holdings, but at the close of trading today the shares stood at Y172.