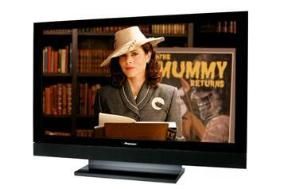 But some have interpreted the Nikkei report as a sign that Pioneer TVs are about to vanish altogether.

'Spectrum of possibilities'
However, a company spokesman told Reuters that ending its involvement in the TV business is only one of several options under consideration.

"There is a whole spectrum of possibilities," he said, "with withdrawal on one end, in-house development and production on the other and sales of procured TVs somewhere in the middle".

In other words, the company could be about to ditch TVs altogether, carry on as it is, or simply buy in sets from third-party manufacturers.

Pioneer's strategy in recent years has been to pitch its TVs at the premium end of the market, as it has since launching its Kuro line in 2007, but such thinking has already seen one company pull out of plasma.

Fujitsu abandoned its flatscreen TV business when it felt it could no longer make a profit in the face of relentless downward pressure on prices.

The European-market LCDs have been widely seen as an effort to gain more of a share in territories where smaller screens are still popular: Sharp, which makes the panels for the Pioneer LCDs, has a 14.3% stake in Pioneer.

Pioneer has also responded to claims in the Nikkei article that it's planning to cut several thousand of its workforce, of around 40,000, by the end of the 2009-10 financial year. The spokesman said no decision had been made on this subject.

The company, which has been projecting a loss of 78bn Yen, or almost £575m, for this financial year, will announce its results for the last three months of 2008 on Thursday. It's also expected to present restructuring plans in the next three weeks.

"'The Nikkei's article was published based on speculation by a Nikkei writer, not based on Pioneer's official announcement.

"We are now reviewing all the business operations to make our mid-term business strategy group-wide. As soon as it is completed, we will officially announce it.'