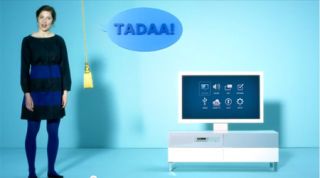 Strange blog from the usually dispassionate DisplaySearch, gatherer of information and analysis to do with the flatscreen industry, suggesting that Ikea's announcement of furniture with integrated TVs 'shames' the consumer electronics industry.

In the piece, Director of European Research Paul Gray suggests that IKEA partnering with Chinese company TCL to make the TV/furniture combinations 'highlights what is wrong with the industry'.

He goes on to say that the big Japanese names have missed a trick with this one, and that 'While some consumers are likely to think twice before buying an Ikea TV, concerned about the quality of the image or other performance attributes, Ikea is offering a five year guarantee, which at least addresses reliability concerns.

'But any consumer encountering a Japanese name on the set would have felt instantly reassured and bought it with even more confidence.'

Can't help feeling the point is being missed here: yes, the famous Japanese names may have inspired confidence in the past, and to an extent still do, but the TV landscape is changing. Just as the South Korean rivals – Samsung and LG – now lead the Panasonics and Sonys of this world in terms of global TV sales, so the Chinese manufacturers are indisputably on the rise.

TCL, the company with which IKEA has partnered, isn't exactly a cheap and cheerful operation: it's the world's sixth-largest TV manufacturer – behind Samsung, LG, Sony, Panasonic and Sharp –, sells over 10m TVs a year (along with almost 44m mobile phones), and employs some 60,000 people.

Last month it announced a 110in LCD TV screen, complete with 3D and 4k2k ultra-high-definition capability, and in 2011 it was the No 1 TV brand in China.

The system will also have an integrated 2.1-channel sound system with wireless subwoofer, a Blu-ray/DVD/CD player built-in, iPod connectivity and even space for extra components in the TV bench.

The screen will come in a range of sizes from 24in upwards, a variety of designs will be available, all cabling will be hidden and just one remote will control the whole thing, if the presenter in the IKEA video can ever catch it.

Ikea's move is not exactly ground-breaking – people have been building TVs and sound systems into furniture ever since the earliest days of home entertainment electronics. Think of those polished walnut radiograms of the past, or TVs such as this Bang & Olufsen, complete with 'wheelbarrow' handles to move it around.

As my visit to the B&O museum in Struer a few years back showed, the Danish company has been doing this stuff for years, and the same goes for many of the famous names of electronics in the past.

IKEA has just taken it a step further, and of course is coming at the problem from the opposite direction – a furniture manufacturer moving into consumer electronics, rather than an electronics company making its products more like furniture.

Mind you, we'll have to wait a while before we get Uppleva – it's Swedish for experience – here in the UK. It rolls out in IKEA stores in Berlin, Gdansk, Milan, Paris and Stockholm in June, then in all Ikea stores in France, Denmark, Italy, Norway, Portugal, Spain and Sweden in the Autumn.

The company says it will go on sale in 'even more countries' around this time next year, so that could bring it to the UK.

So will people buy an IKEA branded TV? Or will they prefer to go for something with a confidence-inspring brand-name, as DisplaySearch suggests?

Well, it's suggested prices could start at £600 or so and there's that five-year guarantee. Oh, and the fact that IKEA circulates 190m copies of its catalogue in 35 countries in 25 languages, has 325 stores worldwide attracting 734m visits last year, and had a turnover in 2011 of €26bn.

Sounds pretty confidence-inspiring to me...