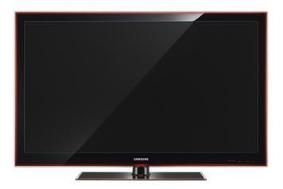 In the meantime, Samsung has announced the 'Ocean Black' Series-7 780 which, as the name suggests, does away with the company's now familiar and highly successful 'Rose Black' bezel design in favour of a subtle blue/black finish. It looks nicer than it sounds, believe us.

The 'Ocean Black' range does without the wireless connectivity of its siblings but, intriguingly, incorporates Samsung's LED backlight technology. The entire panel is variably illuminated from behind by over 1000 LEDs, giving a claimed contrast ratio of 2000000:1.

Series 8 TVs are slim and network enabled
The Series 8 LCDs, which will be available in 40, 46 and 52-inch screen sizes, are extremely slim – just 44mm deep, with none of the random tuner-housing extrusions that some other 'slim' screens incorporate. Samsung has nonetheless found space to pile on the connectivity – the Series-8 screens include USB 2.0 connection for easy browsing of still pictures, video or music.

They're DNLA-enabled too, so the screens can integrate into a home wireless network, for simple streaming of content throughout your house. But perhaps the most pleasing aspect of the Series-8 is the second, 'pebble' remote control which simply handles channel up/down, volume up/down and power on/off.

At the top of the Samsung shop is the new Series-9. These 46 and 55-inch LCDs pack in the LED technology that's included in the 780 models, and take the Series-8 models' DNLA-enabled wireless connectivity as well to make a range of deeply impressive specification – they come with the lovely 'pebble' remote too.

All models are Full HD, 100Hz equipped
And there's another variation on Samsung's escalating expertise in finish in the Series-9s 'Platinum Black' bezel – it looks vaguely textured at the edges. Again, you'll have to take our word that it looks good rather than just odd.

It goes without saying that all of these screens are Full HD 1080p, 100Hz models. Prices are yet to be confirmed but, as they're expected to hit the High Street before the end of next month, we're assured our review models will be arriving any day now.

Samsung also found the time to announce a new Blu-ray player, the BD-P2500. Specification includes the industry's favourite image processor, HQV, which suggests that image projection should be more refined than on previous Samsung players. The BD-P2500 supports Dolby TrueHD and DTS-HD Master Audio, and features 7.1-channel analogue output. Future updates will be via either the machine's Ethernet or USB port, and it also incorporates 1GB of embedded flash memory.