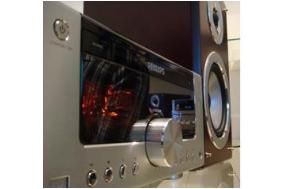 First up, there's a new 'Heritage' hi-fi brand on the cards - three micro systems which feature transparent casing to show off their valve-based technology, but with modern-day internet radio and Streamium technology built in. The Philips MCI500H (pictured) will be the first system to be released from the range.

Also making its IFA debut is 'Full Sound', an MP3 enhancement technology – designed for Philips's new MP3 players and intended to "put back what MP3 takes away", the company claims.

Based on Philips's consumer research that suggests consumers miss the sound quality of home music systems on their portable devices, the new Go Gear MP3 player features the technology and it will be implemented across Philips's portable product range during 2008.

Philips is also expected to unveil 'Living Sound', a sound technology which attempts to widen the sweet spot for listening to music in stereo. A new network-based music player, the MP2900 – looking very much like an MP3 sound bar and an extension of Philips WACS system – will be the first product to use Living Sound.

The Philips MP11 is a similar product designed to be connected to a hi-fi system, featuring Streamium technology to allow access to internet radio and wireless streaming of all MP3 sources.

The surprise product unveiling is expected to be the CinemaOne – a small black, dome-shaped home cinema system, with DVD capability and iPod dock, HDMI and USB sockets. The small unit has four speakers and a subwoofer built-in and will be released "early next year", according to Philips. We expect the CinemaOne to retail at under £200.

Finally, Phillips will reveal a new 42in DVD-based soundbar based around new AmbiSound technology. There's also a 37in version and both have iPod docks and come in black or white, designed for use with either Ambiight TVs or the new Aurea range of TVs.

The main Phillips press conference has just begun, so check back for further news, direct from IFA 2008 in Berlin.