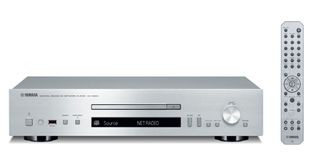 There's some interesting new kit on the Yamaha stand here at IFA.

First up is the £500 CDN-500, a combined CD player and music streamer. It's DLNA-enabled for connecting to your network, and there's USB playback of FLAC 192kHz/24-bit and Apple Lossless audio.

A pure direct function bypasses any extraneous circuitry for optimum playback of CDs. And there's full control of the CDN-500 via Yamaha's MusicPlay app.

All five models benefit from a new DTA Controller app that allows you to programme their alarms via your iOS device.

Not to be outdone by its rivals, Yamaha is introducing a new five-strong range of headphones from September, priced from £100-£250. There are three Pro Series over-ear models and two HPHMT models aimed at hi-fi enthusiasts.

The first two use Yamaha's Intellibeam technology to bounce sound around your room, and come with a wireless active subwoofer that uses AirWired2 tech. The YSP-4300 also has a USB input on the front and built-in FM tuner.

The Yamaha YAS-201 is different in that it uses Yamaha's Airsurround Xtreme system, rather than Intellibeam, to throw sound around the room. It too comes with a wireless active sub and is available in gloss balck or white.