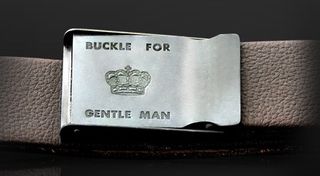 Today marks Sharp's 100th birthday, and to be honest the company looks slightly precarious at the moment.

It finished the last year with record debts, saw its TV market share drop by a third, and is in the awkward position of waiting to see which way potential investor Hon Hai jumps when it comes to renegotiating a stake first mooted back in March.

We're not sure too many champagne corks will be popping – or maybe that should be sake-barrels being ceremonially cracked open – as belts are being tightened across Sharp, and plans made to lose as much as a fifth of the company's workforce.

But at least there are belts to be tightened, and that probably owes something to Sharp's origins.

The name, as any student of Japanese companies is likely to know, comes from the Ever Sharp mechanical pencils it started making in 1915. But before propelling pencils there were belts – or rather belt-buckles, in the form of the Tokubijo Snap-Buckle (seen above), patented by company founder Tokuji Hayakawa at the age of 18.

Having served ten years as an apprentice to a metalworker specialising in precision objects such as traditional Japanese hair-ornaments, the story goes Hayakawa was dismayed to see people in a movie with belts tied and loose ends hanging down, and determined to tidy things up!

The belt was a brave move, as Western clothing was yet to gain popularity, and people tended to still wear kimono even in the big cities. But the Tokubijo Snap Buckle, which had the advantage of not needing holes to be punched in belts – it simply gripped the material of the belt itself – was a rapid runaway success, and Hayakawa soon had orders for over 4750 buckles.

The business started with three employees and working capital of ¥50 – ¥40 of which was a loan!. Contrary to the popular saying, that wasn't a lot of money even in those days.

Hayakawa leased a house in Tokyo to set up the business on September 15, 1912.

Working up to 18 hours a day, the three of them made enough buckles to repay the loan in a month, and within three months the company was ¥120 in the black, expanding to new premises the next year. There it diversified into decorative ferrules for umbrellas and an adjustable-flow water-tap – Hayakawa's second patent, at the age of 20 – and moved again in 1914, to a new plant.

This time the machinery was powered, driven by one horsepower motors rather than the efforts of the production workers, and production efficiency soared.

1915 saw the arrival of the Hayakawa Ever-Ready Sharp Pencil, a propelling design with replaceable leads. It met a cool reception in Japan, critics saying the metal barrel would be too cold in winter for comfortable writing, or that the design clashed with their kimonos(!).

Only after the design proved a runaway success in export markets such as Europe and the USA, with huge orders from trading companies, did domestic distributors get on board.

The name was soon shortened to just Sharp pencil, and the company, by now doing solid export business, had its global name, as well as a thriving domestic business. Pencils sold for ¥7 gold-plated, ¥3 silver-plated and ¥1 nickel-plated.

Disaster struck the company on September 1, 1923, with the Great Kanto Earthquake. Hayakawa lost his factory in the ensuing fire, along with his two children, his wife dying from her burns soon after. Faced with a creditor demanding repayment of company debts, Hayakawa dissolved the company, and transferred its assets and business to the creditor, moving to Osaka to supply technical guidance to the new owner.

Nine months into that consultancy, Hayakawa was back on his feet, and founded a new company, Hayakawa Metal Works Institute Co., on the site (above) where the current Sharp HQ stands in Japan's 'second city', Osaka.

At first the company just made parts for pens and pencils, but its founder had seen a newspaper article about the coming of radio to Japan and, in 1925 visited a clock shop in Osaka which had just received its first delivery of two crystal sets.

Hayakawa, seen above right testing radios the same year, bought one of them, took it back to the factory and – in modern parlance – reverse engineered it.

In other words, he took it apart, saw how it worked and then set about making his own.

The first sets went on sale just as broadcasting hit Osaka, at ¥3.50 – or half the price of the imported sets. The name on the front? Sharp.

As with the pencils, the company was swift to get into export, shipping radios and parts to countries including China, other areas of South-east Asia, India and South America, holding radio fairs to promote the new sets, and visiting dealers to find out about the features consumers wanted.

Sharp soon moved into valve radios, at first using heavy batteries requiring constant replacement or recharging, but by 1929 the company not only had radios with a speaker rather than the headphones of the early models – so the whole family could listen – but running on mains power, too.

A radio in under a minute

And it adopted more modern production methods, including the use of conveyor belts to move products 'down the line' between workstations as they were assembled. Using this, a radio could be built in just 56 seconds.

In 1937, remembering the failings of his own education, Hayakawa founded a school to enable emplyees to make up for the shortcomings of their own schooling, and prepare them to take a fuller role in commerce and industry.

After the end of World War II, during which Sharp continued to make radios both for consumers keen to follow the progress of the conflict and for military use – and developed ways to make those radio while minimising the number of components – there was a demand for repair of domestic radios, and the company often found long queues waiting for the free service it offered at the time.

One TV per household

In 1951 Sharp developed its first TV prototype, Hayakawa travelling to the USA the following year to form a technology tie-up with RCA, and in 1953 the first Sharp TV, the TV3-14, hit the shops.

In line with its conviction that there should soon be 'One Television Set Per Household', Sharp ignored the 17in standard size on which the Japanese industry seemed to have settled, instead launching a 14in model it thought better suited to the size of the rooms in which people viewed – not to mention cheaper!

As early as the late 1950s, Sharp was also exploring another area in which it would go on to have sales success: renewable energy. In 1959 the company was developing solar energy cells, and by 1963 was mass-producing the cells, initially used to power safety buoys in Japan's harbours.

Another Sharp strength – calculators – was seen in 1964, with the launch of the world's first all-transistor desktop calculator (above), although it did cost as much as a family car!

Oh, and there's the small matter of microwave ovens, another familiar Sharp product: the company sold Japan's first in 1961, and by 1966 had added a turntable to give even cooking.

Back with TVs, Sharp was also responsible for some innovations we today take for granted. In 1978 it launched the first set to offer two pictures on the same screen, allowing viewers to watch their favourite show while also keeping up with news and sport, and anticpating today's pictur-in-picture capabilities.

The following year came up with the front-loading videocassette recorder, or VCR.

Until then, VCRs had been top-loaders, with the mechanism popping up to accept the tape: the beauty of the front loader was that at last you could stick it on a shelf under your telly.

in 1982 it developed a combined PC and TV, the X1 (above) – now there's a good idea, and one only now being fully realised with the coming of smart TVs.

Sharp launched it's first wall-mounted TV set in 1991, and ambitiously it also chose to mount the industry's largest colour LCD screen on the wall, not to mention offering a range of finishes to match the consumer's interior decor.

However, in less than 15 years the company was offering another world's largest TV – this time a 65in Full-HD LCD model –, and in 2008 launced a 108in LCD monitor, as usual with a display built at the company's own state-of-the-art TV panel factory.

Sharp has also innovated in audio, in 1999 launching its high-end – and radical-looking – SM-SX100 digital amplifier.

Carrying a price-tag of around £6000, the amplifier was designed as both a statement product and a conduit for digital amplification to move into the mainstream, and within a few years digital amps were being used in products as diverse as audio separates, home cinema systems and in-car entertainment.

Oh, and as the unstoppable move to taking pictures on our mobile phones has the global camera industry looking ever more nervously over its shoulder, bear this in mind: Sharp got there first with a cameraphone, able to take pictures and email them directly while on the move.

That was in 2000, long before anyone had put an 'i' in front of the name of anything – and Sharp's still the leading manufacturer of cameras for smartphones.

As company founder Tokuji Hayakawa said to his employees many years ago, setting out his own business philosophy, the secret is to 'Make products that others want to imitate'.

It's an ability the company needs to bear in mind as it struggles to turn itself around.