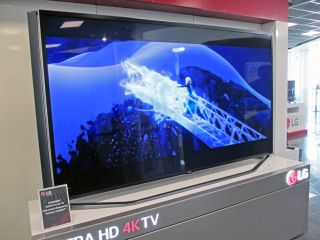 When is 4K not 4K? That was the issue at the heart of Currys/PC World's claim in its Christmas TV ad for LG 4K TVs that "because they're 4K Ultra HD, you can watch your favourite Christmas movies in greater detail".

A number of viewers complained to the ASA that this was misleading, as no mainstream UK broadcaster is yet showing films, or any other programmes, in full 4K resolution. Such material is only available through certain on-demand services such as Netflix.

Currys/PC World, defending the claim, said that the 4K TVs in question would automatically upscale regular high-definition content to "near to 4K quality". It suggested that when watching anything on the LG 4K TVs "the picture detail would show an increased resolution compared to standard Full HD (1920x1080p)".

MORE: Everything you need to know about 4K Ultra HD

However, the ASA said in its assessment that "we have not seen evidence showing how 'near to' 4K quality that increase in resolution was, or that any increase in quality was, therefore, comparable with, and similar to, genuine 4K quality.

"Because there was such limited 4K content available in the UK, we understood that any improvement in quality in films or programmes watched over the Christmas period was unlikely to be achieved by the use of 4K technology specifically."

It ruled that the ad must not be broadcast again in its original form as it breached BCAP Code rules 3.1 (misleading advertising), 3.9 (substantiation) and 3.12 (exaggeration). You can read the full ASA ruling here.