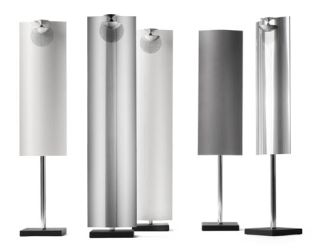 You can always rely on Bang & Olufsen to bring a dash of style to events such as CES, and this morning was a case in point when we had an extensive briefing from the company.

It likes to do things a bit differently, as we've already seen with the BeoPlay A9 wireless speaker, and now it's at it again with its new BeoLab 15/16 system.

As you can see above, the package includes a pair of BeoLab 15 two-way active speakers, the Beolab 16 active subwoofer and a rack-ready amplifier called the Amplifier 1 (not pictured).

What's different about this system is that it's been designed specifically for in-wall or in-ceiling placement. So for example you can hang the two speakers and the similarly slim subwoofer on the wall, while hiding the amplifier away.

What's more, a motorised tilt function allows the speakers to move to a preset angle (up to 45 degrees) when it's turned on, and then tilt back into a flush position when it's switched off.

Each driver in the active speakers is powered by its own amplifier. The Amplifier 1 contains six amps in total: two Class D units rated at 2 x 150W power the subwoofer, while each BeoLab 15 gets 150W for the midrange, and 45W for the tweeter.

The BeoLab 15 is a closed-cabinet design, with a 3/4in tweeter and 3in midrange driver.

The complete package is available in the US now for $4595.

For those who want a more conventional speaker design (well, at least by B&O's standards!), there's the new BeoLab 12 family of wall-hanging or floorstanding models.

Finally, no B&O event would be complete without the launch of a new high-end TV, and today it was the turn of the BeoVision 11, the company's first smart TV. At its heart is an all-new video engine that drives the 240Hz LCD/LED screen in either 2D or 3D.

The set can be connected to the internet wirelessly or via ethernet to give access to online content and apps. DLNA enables wireless streaming of content from a smartphone or NAS drive, and there are six HDMI inputs plus two USB ports. There's even a dedicated space within the cabinet for an Apple TV box.

There are six fron fabric colour options and the front frame comes in silver or black, while the rear cabinet is either black or white. The BeoVision 11 is available now in 40in, 46in and 55in sizes with prices starting from $5995.