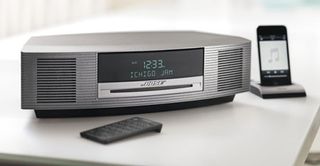 Artist names and song titles provided by broadcasters are now displayed on the screen, and there's a new touchpad on the top of the unit for on/off control and alarm snooze.

You also get dual alarms so different wake-up times can be set to dfferent volumes and different sources.

The Bose Wave Music System III includes a front-loading CD player, and costs £600, while the Bose Wave Radio III (without CD player) is £450.

Both include an aux input for hooking up a smartphone, iPod, TV or computer, as well as a BoseLink input for connection to optional accessories such as the Wave Bluetooth adapter (£130), Wave Connect iPod/iPhone dock (£130) and Wave multi-CD changer (£300).