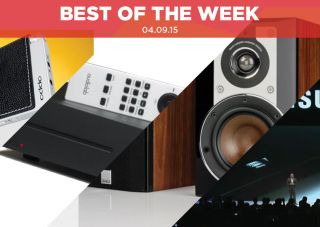 There have been plenty of goings on at the IFA Show in Berlin this week, with Samsung beating Panasonic to the punch and revealing a date (and possible price) for the world's first Ultra HD Blu-ray player. Elsewhere, Amazon announced it was bringing offline playback capability to its Prime Video apps, while Onkyo announced two new stereo receivers.

On the reviews front it was another strong week, with varied products tested, including Dali's Opticon 1 loudspeakers, Oppo's HA-2 headphone amp and the successor to Audiolab's popular 8200CD player, the 8300CD.

It's also new What Hi-Fi? Sound and Vision week, with the October issue now on sale. In it you'll find reviews on wireless desktop speakers starting at £150, reviews of 48in+ HD and 4K TVs along with the latest in home cinema and hi-fi news.

With rumours suggesting Panasonic would unveil its (and the world's) first Ultra HD player, it looks as if Samsung has stolen a march.

Samsung's player is set to go on sale early next year in Europe. There's no official word on the price, but Samsung says it will support 4K streaming services and HDR technology.

And the first UHD title? Fox's Kingsman: The Secret Service.

READ MORE: Ultra HD Blu-ray: everything you need to know

Netflix said it would never do it, but Amazon has brought offline playback to its Prime Video service.

Available on its Android and iOS apps, Prime members (or subscribers to the Prime Video service) can download selected TV shows and films, with Amazon's own titles available (Transparent, Mozart in the Jungle) along with other TV shows and films such as The Walking Dead and last year's Paddington.

Onkyo unveils a pair of high-res network stereo receivers and a budget 5.1 model

Both receivers will feature Deezer, TuneIn and Spotify Connect, with the 8150 also including AirPlay, Bluetooth and DAB+ digital radio.

Onkyo also revealed its TX-SR252, a budget, no-frills AV receiver, which packs in 4K support. It will retail for £199.

Teased over the past few months, the Opticon 1s – which sounds an awful lot like a Transformer – have been a long time coming. Are they worth the wait?

Yes, but with some caveats. Borrowing technology from Dali's Epicon and Rubicon series, they offer a sound that's detailed and agile but can be guilty of being overly enthusiastic in the treble.

You'll need to pair them with a better than average system if you want to get the best out of them. If you can do that, the Opticon 1s are worth the investment.

With a headphone DAC it's all about how it makes our music sound rather than the looks. Even so, Oppo has made an aesthetically pleasing headphone amp in the HA-2.

Take your eyes off it and listen to the sound and you're met by a well-balanced, natural and engaging performance.

Audiolab's 8200CD was a great performer for many years, retaining its five-star status before losing out to the latest generation of CD players. Audiolab has decided to replace it with the 8300CD.

The problem here though, is that while it's better in some ways than its predecessor, the sound, surprisingly, lacks verve and isn't as entertaining as some of its rivals.

So while it improves on its forebear in many respects, in the one that really counts – its sound – it falls just short. A worthy CD player nonetheless.