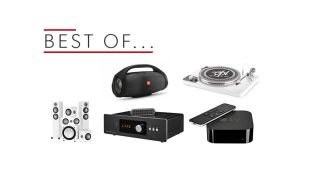 Elsewhere we had a number of reviews, the most notable being Roksan's Blak integrated amplifier and Monitor Audio's Silver 200 AV12 speaker package.

MORE: The best What Hi-Fi? deals of the month

VPI has announced the Player, an affordable high-end turntable that doesn't require speakers.

Though it can be hooked up to a standard hi-fi system, the Player also has room for a 3.5mm headphone jack, along with a built-in phono stage, headphone amp and volume control.

JBL's latest wireless speaker is the company's largest effort yet.

At 50cm long and weighing around 5kg, it's waterproof and JBL claims it can last up to 24 hours on one charge.

There's no official launch date, but we should see more of this giant speaker at IFA in September.

Apple has released beta updates for iOS, macOS and tvOS suggesting that a new Apple TV is on the way – and that it will support HDR.

This leak comes from a developer who spotted 4K and HDR assets within the code for the Apple TV J105A model.

There's still no official announcement, but more could be revealed at Apple's product event in September.

Tangent adds to its Spectrum range to create 5.1 system

Save £50 on the Amazon Echo this Bank Holiday weekend

Rachel Goswell on Slowdive, Minor Victories and a circular 20 years

How to watch Premier League football on TV, online, mobile

Roksan's Blak integrated amplifier is a fully featured all-rounder that works across a wide range of systems and all types of musical genres.

The sound is powerful and energetic, but also subtle and refined. Apart from a few operational oddities, it's an excellent stereo amp.

And our opinion hasn't changed. The 5.1 speaker package proves to be just as talented, with a clear, balanced sound that's expressive and fun.

If this is what we can expect from the next generation of Silver speakers, we're looking forward to hearing them.