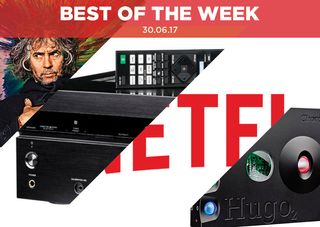 This week, Okja became the first Dolby Atmos-compatible title on streaming service Netflix, Sky Sports is rumoured to be renaming its sports channels and cutting prices and Meridian will introduce new products as part of its 40th anniversary celebration, though it's keeping quiet on what those products are.

Four other Atmos films are coming to Netflix this year, including BLAME!, Death Note, Bright and Wheelman.

However, the only devices that currently support Netflix's Dolby Atmos integration are the Xbox One and Xbox One S, and you will need a surround-sound system that's compatible with Atmos too.

Sky is set to rename its sports channels, with each one themed around a different sport.

The other significant news is pricing. Each channel can be individually bought, with the cheapest package starting at £18 a month. Sky has so far declined to comment.

Meridian celebrates its 40th with new products due in September

Meridian has reached its 40th birthday, and will introduce several new products to celebrate the landmark.

The company is keeping quiet about what these products may be, but all is expected to be revealed at CEDIA in San Diego on 8th September.

This will be followed by a product launch event in London later that month.

READ MORE: Meridian celebrates its 40th with new products due in September

Facebook to invest millions in producing its own TV shows

Cambridge CXA60 vs Rega Brio – which is better?

That Was Then... Apple iPhone review

The Flaming Lips: the band that filled a record with blood

We've enjoyed Chord's Hugo, but now the Hugo 2 has arrived on the scene, it's time to move on.

At £1800, it's considerably more expensive than the original, but you'd be hard-pressed to find anything as good at this price. The sound is superbly detailed and dynamic, offering an open and coherent performance.

It's hard to find any meaningful fault with the way the Hugo 2 delivers your digital audio files. It is simply fantastic.

It's been two years since we last reviewed a home cinema amp from Sony. It's returned with a belter in the STR-DN1080.

Right off the bat it sounds fantastic. Packing in insight and authority, it produces an enjoyably dynamic performance. Feature-wise it's caught up to its rivals, incorporating both Atmos and DTS:X.

The STR-DN1080 is filled to the brim with the latest technology, and puts in a cracking performance too.

Audio Pro's latest wireless speaker looks identical to the most recent T5, but there's one big difference – it's now capable of multi-room.

It's a decent attempt too, with a detailed and expressive sound that's an excellent performer across a range of sources.

Audio Pro has taken a while to wake up to multi-room, but it has been well worth the wait.