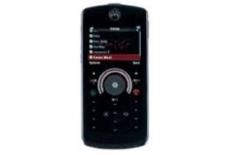 Rokr E8 doesn’t have enough strong points in this company

The Motorola Rokr E8 has a similar flat profile to the iPhone thanks to the company's first use of ‘haptic' keys. There are no buttons sticking out of the unit, instead the fascia has a number of touch sensitive pads that respond to touch with vibrating, tactile feedback.

Good in theory, but in practice slightly curious. We found the keys weren't as responsive as we'd like, with the vibration coming – albeit fractionally – after the press.

It also means the phone vibrates should you tap it, which doesn't seem necessary or reassuring. On the other hand the touch-sensitive scroll wheel is fast and much more immediate – but again the interface isn't the most intuitive in our minds.

Decent spec, but somewhat thin sound
In terms of specification, the Rokr E8 has a 2GB internal memory, capable of playing MP3, AAC, WMA and WAVs, support for video capture and playback, an FM radio and a 2.0-megapixel camera -– but no 3G support. There's a 2in colour screen, which proves sharp and detailed for the menus and video content.

Sonically, the crazy-looking earbuds are surprisingly snug and easy to fit, and deliver an airy, open sound.

Again, though, it can't hold a torch to the best here – lacking the solidity and bass depth required to get away from that compressed, thin ‘phone' sound.

While it may be immediately easy on the eye, we found the Rokr E8's superficial impressiveness somewhat underwhelming in the flesh. And that, together with average sound, leaves us decidedly nonplussed.