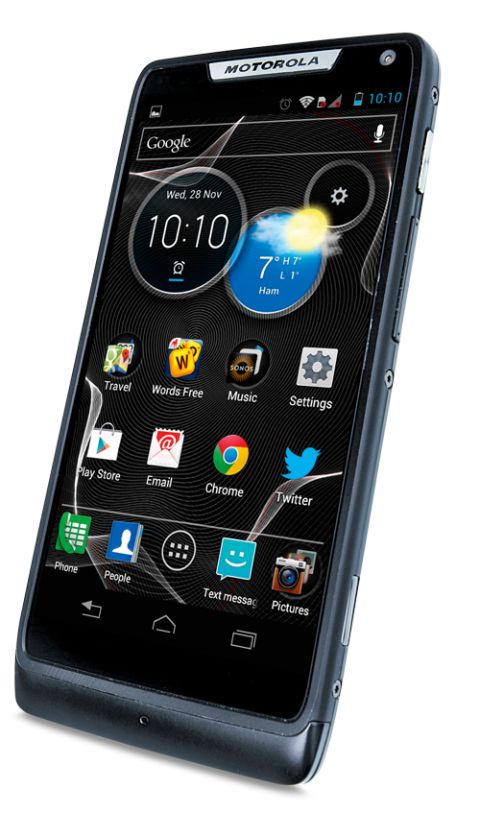 Solid but uninspiring, the Razr i struggles to get us excited

The thrill of getting your hands on a shiny new gadget never gets old for most tech-lovers, and is a crucial part of getting people to part with hard-earned cash.

That thrill is arguably most felt now in the world of smartphones, helped no doubt by the hands-on aspect of the products in question.

The original Razr certainly captured our collective imagination back in 2003. It was one of the first iconic smartphones, and became the fastest-selling ‘clamshell’ handset in history, with more than 130m sold. But Motorola has struggled to make an impact since – can the Motorola Razr i rekindle that excitement?

Following in the Razr’s footsteps, the Razr i looks to major on style. It’s sold as ‘the fullscreen phone’ due to the particularly slender frame round the screen, but we’re not convinced it’s that noticeable next to rivals. That said, along with its 4.3in AMOLED screen, it does make for a more compact handset in this supersize era.

There’s clearly no clamshell here but there are nods to the Razr’s traditional edges and angles. Are we excited by the design? Not really, though it does feel solid and built to last.

The other selling point is its super-quick Intel 2GHz single-core processor, which produced some lightning-fast speeds. Browsing the Android 4.0 interface (with a 4.1 Jelly Bean upgrade promised soon) was a breeze, but there was some lag once we had a few apps up.

The Motorola skin over the Android OS is pretty light, with no physical keys and the standard back, home and open apps touch buttons at the bottom of the screen. There are seven screens in all and standard Android customisation. All told, the i’s OS is intuitive and neat.

While browsing you’ll notice the 4.3in screen size, which gives away a small but noticeable chunk of real estate to most of the rivals here. Otherwise the screen is bright and text sharp, but whites could be cleaner, having a slight yellowish tint.

Watching video content, this off-white tint is noticeable again, while colours generally lack a little warmth and three-dimensionality compared with the best about. Motion is smooth, however, and black levels fairly strong. Rivals with bigger screens, greater detail and more dynamic colours, are easier to get excited about.

The 8GB memory will undoubtedly fill up fast but thankfully there’s an SD card slot, too. Load up some music and again it’s detail that the Razr i is missing, with strings sounding thin and one-dimensional on Hans Zimmer’s Inception soundtrack, while voices sound distant and dull on Foster The People’s Pumped Up Kicks.

There’s decent camera and call quality, plus a good battery performance. Video and audio aren’t up to the standards of the best, though. Despite a clean interface and fast browsing, we just can’t get particularly excited about the Razr i.