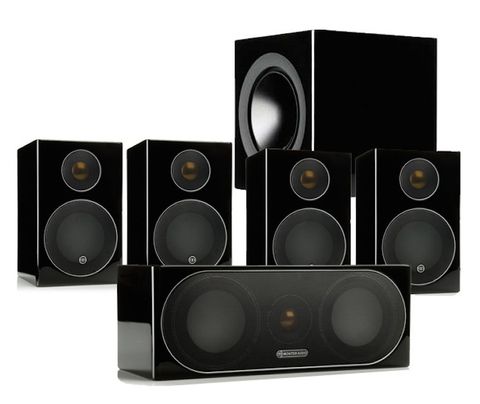 Best style package £1400-£1800, Awards 2014. This package sounds wonderfully cohesive and entertaining – it’s up there with the very best at this price

The Monitor Audio R90HT1 package has been assembled from the company’s newly revamped Radius range of loudspeakers.

If you yearn for a discreet 5.1 set-up, this R90HT1 package should be on your radar, because it’s a remarkable success.

The Radius 90 speakers feature a new version of Monitor Audio’s 25mm C-CAM (Ceramic-coated Aluminium/Magnesium) tweeter – and gone are the plastic mid/bass drivers of the previous generation.

For the first time in the Radius range, the tweeters are also now made from C-CAM. Monitor Audio claims the new cones boast lower distortion and greater force than the older model. They’re also capable of longer excursion, which is why Monitor Audio has had to enlarge the grille with a slightly more bulbous profile.

The Radius 200 centre channel is a brand-new speaker. It uses two 4in C-CAM drivers (compared with just one plastic one on the old R180), with one on either side of the new tweeter.

The Radius 390 subwoofer is a fresh design too. More cubic in appearance than before, it now fires sideways as opposed to downwards on the older models. It uses a 25cm C-CAM driver on either side, one of which is a passive, specially tuned ABR (Auxiliary Bass Radiator). The 390 is powered by a 220W amp.

This package should blend in with most living rooms, especially if you have the speakers hugging a wall. Even the Radius 390 subwoofer looks stealthy enough not to intrude too much.

Optional brackets double as ceiling and wall-mounts and cost £15 each. Dedicated stands for the fronts and rears weigh in at £175 a pair.

The sum of all these separate parts is a system that works together beautifully. The integration between fronts, rears and the subwoofer is seamless.

The surround field, too, is gapless, with effects flowing between channels effortlessly, immersing you deep in the action.

G.I. Joe: Retaliation may bear more resemblance to a computer game than cutting-edge cinema, but it’s one heck of a test disc. The slickly choreographed action scenes sound every bit as impressive as they look, and the Monitor Audio R90HT1 communicates it all beautifully.

The coming together of metal on metal can sound hard or bright on poorer systems, but not here. While it’s true that out of the box it is a little ‘zingy’ at the top end, a good few days of running in irons that out nicely, leaving you with crisp, detailed highs.

Push the speakers close to a wall and they work even better thanks to the extra reinforcement that the wall provides.

Dialogue through the centre channel is clear and communicative, the Radius 390 subwoofer is excellent. We’ve heard enough bass boxes to know that they can often be the Achilles heel of 5.1 systems, but that’s not the case here.

The 390 displays a potent combination of precision and weight with no fear of bottoming out or losing its grip.

The sub has three settings: impact, movie and music. ‘Impact’ seems to emphasise the upper bass and the leading edges of explosions – we found it can sound a little forced.

‘Movie’ appears to soften and spread the blow of powerful bass notes. ‘Music’ would be our choice – it seems to give the most workable combination of weight, solidity and punch.

Speaking of music, the Radius speakers work wonders whether you’re spinning a CD in stereo or listening to a multichannel music Blu-ray. Spin Michael Jackson’s Beat It and the package displays a solid bassline a great sense of timing and impressive dynamic clout.

In terms of pricing, the Monitor Audio RD90HT1 sits neatly between the likes of the B&W MT-50 and MT-60 packages, two of our favourite 5.1 set-ups.

For this brilliantly balanced and multi-talented all-rounder, that’s a good place to be. We highly recommend it.